Friday of the Eighth Week of Ordinary Time 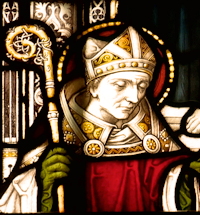 According to the Roman Martyrology, today is the feast of St. Bernard of Montjoux, an Italian churchman, founder of the Alpine hospices of Saint Bernard. His life was spent working among the people of the Val d'Aosta. He is the patron of mountaineers. St. Germanus, bishop and confessor was renowned for his miracles which were recorded by Bishop Fortunatus. He is also mentioned in the Roman Martyrology. 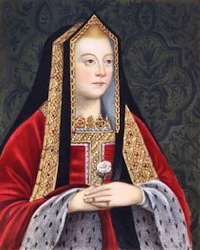 The Tudors sought to defuse her potential threat by keeping her close to them, marrying her to Sir Richard Pole, who was related to Henry VII, and keeping her close at court. Margaret became lady in waiting to Catherine of Aragon, beginning a lifelong friendship, and she became governess to Princess Mary, the daughter of Henry VIII and Catherine. At first Henry favoured Margaret, restoring to her lost family lands and titles, but this came to an end at the time of his divorce from Catherine. Her loyalty to Catherine, and to Mary, as well as to her Catholic faith, brought her into conflict with the King at the time of his divorce and remarriage to Anne Boleyn. If her own opposition to Henry’s behaviour, and her position as a possible contender for the throne when the Tudor dynasty was looking shaky were not enough, her son Reginald Pole was needling the King from overseas and encouraging opposition to him. This made Margaret’s position very dangerous indeed. Although the King described her as ‘the holiest woman in England’ she was arrested on the grounds of treason, and imprisoned for some time at Cowdray in 1538-9, although she never faced trial and there was no credible evidence against her. In spite of this she was executed in 1541, at the age of 70. Reportedly the inexperienced executioner took ten blows to sever her head.When her son Reginald Pole, now a cardinal, heard of his mother's death, he is reported to have said: "Hitherto I have thought myself indebted to the divine goodness for having received my birth from one of the most noble and virtuous women in England; but from henceforth my obligation will be much greater, for I understand that I am now the son of a martyr. May God be thanked and praised. We must rejoice, because now we have one more patron to intercede for us in Heaven." Margaret Pole was beatified with other martyrs of penal times in 1886.Things to Do:
Find us on Social Media.