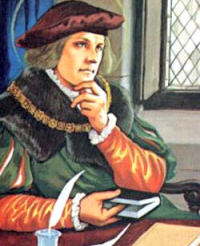 Father, you confirm the true faith with the crown of martyrdom. May the prayers of Saints John Fisher and Thomas More give us the courage to proclaim our faith by the witness of our lives. Grant this through our Lord Jesus Christ, your Son, who lives and reigns with you and the Holy Spirit, one God, for ever and ever. Amen.

St. John Fisher studied Theology in Cambridge (England) and became Bishop of Rochester. His friend, Thomas More, wrote of him, 'I reckon in this realm no one man, in wisdom, learning and long approved virtue together, meet to be matched and compared with him.' He and his friend St. Thomas More gave up their lives in testimony to the unity of the Church and to the indissolubility of Marriage.St. Paulinus was born of a patrician Roman family at Bordeaux. He was successively prefect, senator and consul. His wife, wishing to consecrate herself to God, gave up rank and riches; he followed her example and went to live an austere hermit's life at Nola in Italy. There he became a priest and then bishop of the city, and gave his people not only an example of virtue but also wise guidance during the ravages and calamities of the Gothic invasion. He died in 431, aged 78, and was buried at Nola near the tomb of St. Felix.According to the 1962 Missal of Bl. John XXIII the Extraordinary Form of the Roman Rite, today is the feast of St. Alban who was venerated as the proto-martyr of Britain. He was a citizen of Verulam and was converted by a persecuted priest whom he sheltered in his house. He was executed on Holmhurst Hill. On that spot King Offa erected the Benedictine abbey of St. Alban's by which name Verulam has since been known. 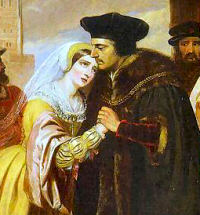 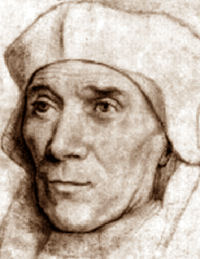 John Fisher is usually associated with Erasmus, Thomas More and other Renaissance humanists. His life, therefore, did not have the external simplicity found in the lives of some saints. Rather, he was a man of learning, associated with the intellectuals and political leaders of his day. He was interested in the contemporary culture and eventually became chancellor at Cambridge. He had been made a bishop at thirty-five, and one of his interests was raising the standard of preaching in England. Fisher himself was an accomplished preacher and writer. His sermons on the penitential psalms were reprinted seven times before his death. With the coming of Lutheranism, he was drawn into controversy. His eight books against heresy gave him a leading position among European theologians. 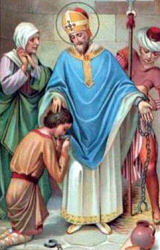 Despite personal remonstrances, Paulinus was ordained a priest in Spain, and from there he returned to do honor at the grave of his sainted spiritual father. In 409 he became bishop of Tours. Paulinus was an author and poet; he corresponded with the great saints and scholars of his time, Ambrose and Augustine. During the Vandal invasion he used every possible means to feed the poor. When a poor widow asked for money to ransom her son, he gave himself into slavery. With God's aid he returned to his flock and died at the age of seventy-eight in 431. His last words were: "I will prepare a lamp for My anointed" (Ps. 131). His particular virtue was love toward the poor. Excerpted from The Church's Year of Grace, Pius Parsch
Stay in Touch!
Subscribe to Insights...free!
News, analysis & spirituality by email, twice-weekly from CatholicCulture.org.