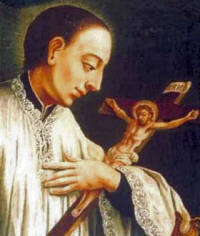 Father of love, giver of all good things, in St. Aloysius you combined remarkable innocence with the spirit of penance. By the help of his prayers may we who have not followed his innocence follow his example of penance. Grant this through our Lord Jesus Christ, your Son, who lives and reigns with you and the Holy Spirit, one God, for ever and ever. Amen.