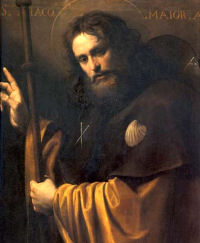 Because Christopher was of giant stature, he practiced charity by carrying pilgrims across a certain river. Once a child asked to be taken across. He complied as usual. While carrying the child on his shoulders through the river, it became heavier and heavier, and finally he could hardly support it. Then the revelation was made: "You are carrying the Lord of the world!" It was Christ (Christopher means "Christ-carrier").The legend has the nature of a symbol. Bishop Vida gives the following exposition: "Because you, O Christopher, always carried Christ in your heart, the artists place Christ on your shoulders. Because you suffered much, they paint you standing deep in the waters. And because you could not accomplish this without being large of stature, they have made you a giant, bigger than great temples; therefore do you live under the open heavens during the greatest cold. And since you conquered all that is difficult, they have given you a blossoming palm as traveling staff."Excerpted from The Church's Year of Grace, Pius ParschPatron: Archers; automobile drivers; automobilists; bachelors; boatmen; bus drivers;, cab drivers; floods; fruit dealers; fullers; hailstorms; holy death; lorry drivers; mariners; market carriers; motorists; porters; Rab, Croatia; sailors; storms; sudden death; taxi drivers; toothache; transportation; transportation workers; travellers; truck drivers; truckers; watermen. Symbols: Giant; torrent; tree; man with Christ on his shoulders.Things to Do:
Stay in Touch!
Subscribe to Insights...free!
News, analysis & spirituality by email, twice-weekly from CatholicCulture.org.