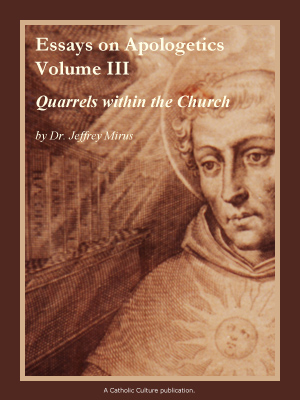 Quarrels within the Church

How we go about explaining and defending the Faith depends very much on our audience. This third volume of Dr. Jeff Mirus’ collected essays in apologetics includes essays written between 2004 and 2012 which primarily address quarrels which too often divide Catholics from each other because of an inadequate grasp of the Faith. These topics include the nature of religious authority, Modernism, Traditionalism, Catholic social teaching, the Catholic approach to Scripture, and several other contemporary problems, plus a section of essays designed purely to enrich our understanding of the Faith. The author holds his Ph.D. from Princeton University and has written frequently on apologetics over the past forty years.