On Pilgrimage with St. James the Greater

But this feast day did not stand out to me personally until at the age of 27 I took a Spanish class at Franciscan University of Steubenville with Señorita Capote. She was a lovely, vibrant Cuban woman who was very holy and contagiously enthusiastic, especially about the Spanish language and culture. I was working hard to finish my Spanish requirements, so I was taking Spanish 102 over the summer. Although Señorita had officially retired from teaching, the usual Spanish teacher was on maternity leave, so Señorita taught the class that summer. And she changed my viewpoint on St. James forever. 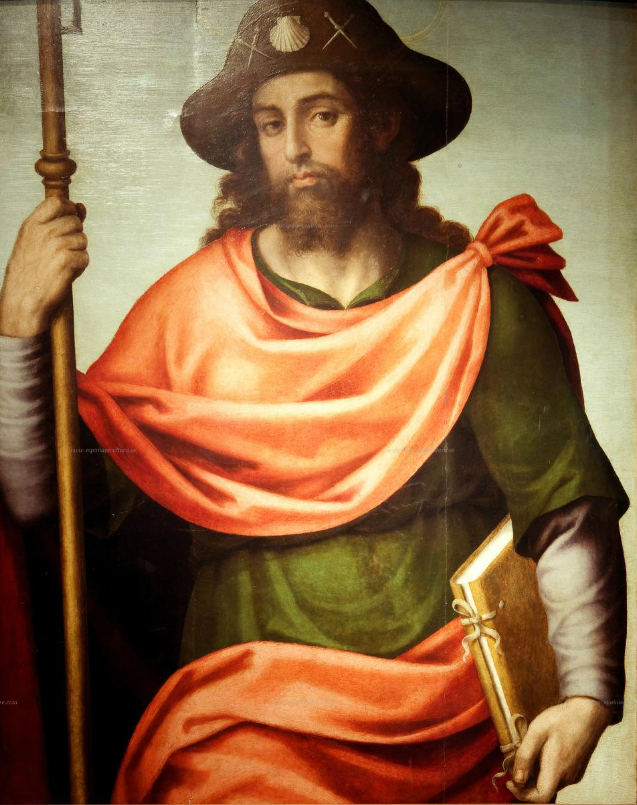 July 25 occurred during our summertime class, so Señorita decided to make it a celebratory feast day. Santiago is the Spanish form of James, and the Cathedral Santiago de Compostela is located in Spain. This is the shrine of the apostle James, where his body located, and this cathedral in some form or another has been honoring St. James and hosting pilgrims since the 9th century. Señorita brought in photos, videos and stories, described the pilgrimages along Camino Santiago, or the Way of St. James, the geography, the traditions, the foods and the whole festivity of St. James. She painted the picture of how on July 24, St. James' Eve, fireworks are set off around the church, and the whole facade is outlined in lights.

My favorite highlight was her description of the large censor or the Botafumeiro that swings through the cathedral. This is a large censor, weighing over 100 pounds, requiring eight grown men to swing it, that swings in a pendular movement over 50 meters towards the side naves, filling the entire church with the incense. The Cathedral has a page with more information, including a video. (YouTube has a few other videos which help give a sense of its large size.) It is said that the liberal use of incense was to mask the odor of many unwashed pilgrims who came in large numbers to the Cathedral.

For the Holy Year 2000, there were webcams set up in the Cathedral, and I have been able to catch a glimpse of the Botafumeiro in live action. It is quite impressive.

Santiago de Compostela is located in the region of Galicia, which is unique due to Celtic influences. Bagpipes are played here, lots of Scottish-like festivities and costumes. Another interesting tidbit: horses run free in rural areas. The city of Santiago de Compostela is full of medieval flavor. Old-fashioned artisan items are still sold here: silver, jet jewelry and even Galician wooden shoes. The Way of St. James, famous for the pilgrims of the Middle Ages, is gaining more popularity after a period of decline. July is the month for the Tour de France, during which some of the mountain stages in the Pyrenees cross over some of the medieval pilgrimage routes for the Camino.

On my own bookshelves I have several titles by Penelope Casas, including her Discovering Spain. Her descriptions of the region of Galicia where Santiago de Compostela and particular information about Santiago are wonderful, and of the city itself is priceless:

Crafts, religion and food all intertwine in Santiago’s symbol, the scallop shell. Pilgrims carried holy water in jet receptacles carved to resemble scallop shells and returned to their homelands with real shells pinned to their robes as evidence that they had indeed reached the holy city (Santiago, Rome and Jerusalem are the three cities that he Catholic church officially designates “holy”.) And you will see fresh scallops, still attached to their shells, in food displays all over the city….

The Way of St. James
It was a medieval phenomenon: throngs of Europe’s sick and weary, gathering at designated French cities (mainly Paris, Vezelay, Le Puy, and Arles), then walking across the formidable Pyrenees, even in the dead of winter, on a cruel journey that took months to complete. It was at first a movement initiated by the masses, but eventually bishops, priests, kings, Saint Francis of Assisi, even twelfth century Pope Calixtus II, joined the peregrination to Santiago.

Pilgrimages to Santiago became a major impetus for expansion of the clergy and construction of churches and hospitals to care for pilgrims en route, and resulted in an exchange of ideas and a mingling of concepts and cultures on a grand scale. Today if you follow the route from the French border you will find early churches and hospitals (that gave rise to towns and cities with wide lineal roads to accommodate the masses) every thirty kilometers or so, the average distance a pilgrim might cover in a day. One of the world's first travel guidebooks, compiled by a French priest, Aymeric Picaud, tells the pilgrim where to find the best food and lodging en route ("Estella, rich in fine bread and excellent wine, as well as fine meat and fish and supplied with all manner of goodnesses"), even where they should avoid drinking the water ("Take care not to drink nor let your horse drink from it [the Rio Salado in Navarra], for it will be fatal!").

The costume of the pilgrim was standard: a thick coarse wool cape, a stave with a gourd atop to store water, sturdy sandals, a wide-brim felt hat turned up in front, and on the return (for those who had the health to return) scallop shells pinned to the shoulders of their robes as evidence that indeed they had reached Santiago.

The pilgrimages reached their height in the twelfth century, then declined but never disappeared. The devout and those merely seeking adventure backpack today along the Way of Saint James (Pope John in his younger years was one of them) and are still cared for by the clergy as they tenaciously make their way to Santiago. 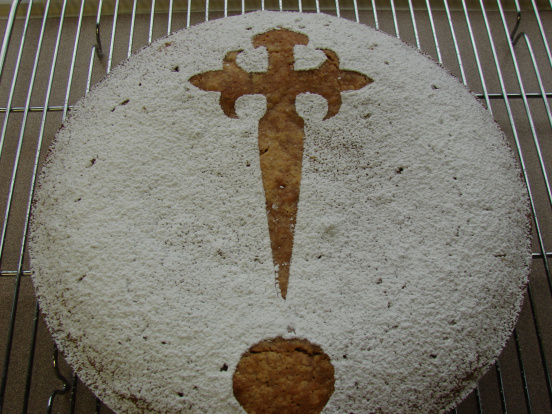 The dominant traditional food to honor St. James is scallops, a reminder of the shell symbol of the pilgrim. There are also a few traditional tart recipes included in the Catholic Culture recipe database. One year I made the Almond Torte from Santiago de Compostela which was quite delicious. I added the Cross of St. James and the scallop shell with powdered sugar as the decoration for the cake.

I've only taken short pilgrimages, none that have taken weeks and hardship. Since the early times of the Church, the faithful would visit the Holy Land and other places as a form of prayer, whether in petition or thanksgiving. Later a pilgrimage became a replacement for public penance, so in the Middle Ages the pilgrimage became very popular.

We are all pilgrims on earth on our journey towards heaven. We are known as the "Church Militant." It is in the Eucharistic Prayer III of Mass that we hear this reminder:

Be pleased to confirm in faith and charity your pilgrim church on earth, with your servant N. our Pope and N. our bishop, the Order of Bishops, all your clergy, and the entire people you have gained for your own.

This feast, especially with the Camino de Santiago or Way of St. James brings to mind our universal role as a pilgrim on earth.

We might not be able to make the medieval pilgrimage journey to Santiago de Compostela, but this feast gives us a chance to think of the physical journey of the pilgrim, and remind us of the spiritual journey we are making.

The theme of pilgrimage can be extended with the family. It reminds me of  “playing pilgrims” in Louisa May Alcott’s Little Women. They dressed in a pilgrim’s costume, similar to what Penelope Casas described above. The family could make a project out of being pilgrims, by making scalloped shell pins (either out of clay or real shell), gourds for water, walking sticks, etc. “Playing pilgrims” could be simple or elaborate as one desires: Set up rooms or places in the yard or destinations for travel; camping in the yard as an experience of “roughing it"; making pilgrim food; walking with bread under the arm and staff; crafts such as making scalloped shell pins, gourd, making the cloak and hat; and dressing as the pilgrim, custodian or knight of the basilica.

Little Women took their inspiration from Pilgrim’s Progress by John Bunyan, a Protestant work. The family can take a Catholic twist and use C.S. Lewis’ book Pilgrim’s Regress, and The Canterbury Tales by Geoffrey Chaucer (pilgrims on way to St. Thomas Becket shrine) for inspiration. Finding other information regarding St. James' pilgrims, pilgrims to the Holy Land and Rome can help expand the image of the Catholic pilgrim throughpit the history of the Church.

We might not all don a pilgrim's cap and scallop shell, but St. James can us contemplate the fact that we are pilgrims on earth. This life is transitory; every earthly action should bring us closer to the aim of our pilgrimage: heaven. May St. James the Greater help us on our Camino!