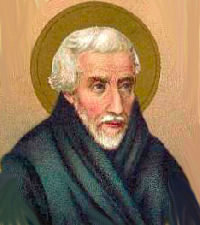 December 21: Hear in kindness, O Lord, the prayers of your people, that those who rejoice at the coming of your Only Begotten Son in our flesh may, when at last he comes in glory, gain the reward of eternal life. Through Our Lord Jesus Christ, your Son, who lives and reigns with you in the unity of the Holy Spirit, God, for ever and ever.

Optional Memorial of St. Peter Canisius: O God, who for the defense of the Catholic faith made the Priest Saint Peter Canisius strong in virtue and in learning, grant, through his intercession, that those who seek the truth may joyfully find you, their God, and that your faithful people may persevere in confessing you. Through our Lord Jesus Christ, your Son, who lives and reigns with you in the unity of the Holy Spirit, God, for ever and ever.

The Lord and Ruler will be coming soon, and his name will be called Emmanuel, because he will be God-with-us.

O Emmanuel, our King and Giver of Law: come ato save us, Lord our God!

Blessed are you who have believed, that what was spoken to you by the Lord would be fulfilled.

In the midst of the Church he opened his mouth, and the Lord filled him with the spirit of wisdom and understanding and clothed him in a robe of glory.

Behold a faithful and prudent steward to give them their allowance of food at the proper time.

Today the Church celebrates the Optional Memorial of St. Peter Canisius (1521-1597), who was born at Nijmegen, Holland, at the very time that Luther began to rebel against the Church and St. Ignatius Loyola was laying the foundations of the Jesuit Order. After studying the arts, civil law and theology, St. Peter joined the Jesuit Order and was ordained a priest in 1546. He is noted especially for the following services to the Church: he defended the Catholic faith against the Protestants; by preaching, writing, founding colleges and seminaries, he caused Catholic life to flourish; he rendered invaluable services to the ecumenical Council of Trent; he wrote many catechisms which were translated into twelve languages in his own life time. He died in Fribourg, Switzerland.

According to the previous missal (1962), today was the feast of St. Thomas the Apostle, now celebrated July 3. There are many traditions related to St. Thomas (A-Thomasing and Christmas baking) that were practicing on December 21st that are connected with preparing for Christmas, since his feast originally was a few days before Christmas. The traditions still hold merit, but are no longer attached to his feast day.

Today is the Fifth of the O Antiphons, O Oriens (O Radiant Dawn/O Dayspring/O Morning Star). It is the Sun, the Redeemer, whom we await. "I am the light [the sun] of the world" (John 8:12). Christ is the light of the world because of the faith which He has infused into souls. He has enlightened the world by His teaching and by the example of His life. In the crib, in Nazareth, on the cross on Calvary, in the tabernacle of our churches, He answers the eternal questioning of the benighted soul.

For those following the Jesse Tree, you can either continue through Christmas Eve following Catholic Culture's Jesse Tree, or use symbols based on the “O” Antiphons (see Jesse Tree Instructions).

O Radiant Dawn
O eternal Sun, come and enlighten us, for where Thou art not, there is darkness, death, and wickedness. "Come and enlighten all who sit in darkness and in the shadow of death."

"But now [you are] light in the Lord" (Eph. 5:18). In the Church the light has now appeared to us on the first Christmas night, on the day of our baptism, daily in the Mass and at the time of Holy Communion, and in the many inspirations and promptings of grace. How thankful we should be for this light, which is Christ.

But we have yet to reach the full measure of the stature of Christ. Alas! we let ourselves be burdened by earthly sorrow, we are distracted by the excitement of the moment, and our spiritual growth is hampered by our attachment to the things of this world. Fervently we should repeat that plea of Holy Mother the Church. "O dawning Sun of righteousness, come and enlighten us, who yet sit in the darkness of suffering, of human reasoning, and of self-love."

The light of Christ will be revealed perfectly only when we meet Him at the time of His second coming. Then we shall be brought into the light of glory, and we shall "shine as the sun in the kingdom of the Father" (Matt. 13:48). "Sown in corruption we shall rise in incorruption" (I Cor. 15:42). May the day of enlightenment come soon! 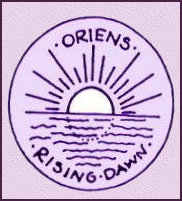 Come, and shine on those seated in darkness, and in the shadow of death.

Traditional Antiphon: O Dawn, splendor of eternal light, and sun of justice, come, and shine on those seated in darkness, and in the shadow of death.

Vespers Antiphon: O Radiant Dawn, splendor of eternal light, sun of justice: come, shine on those who dwell in darkness and the shadow of death.

Just as the natural sun gives light and life to all upon whom its rays fall, so Christ, the Rising Dawn, dispels darkness and brings eternal life and light. 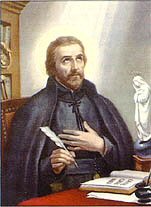 Symbols and Representation: with his catechism and other books; teaching a group of children