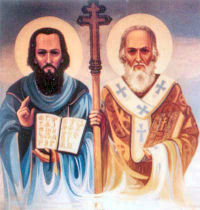 St. Cyril was a priest and a philosopher and accompanied his brother St. Methodius to Moravia to preach the Gospel. They both perfected a Slavonic alphabet which is now known as the Cyrillic alphabet and translated the liturgy into this language. They were summoned to Rome, where Cyril died on this date in 869, and Methodius was consecrated bishop and sent to Pannonia. He died on April 6, 885, in Velehrad, Czech Republic, after working tirelessly on spreading the Gospel.

According to the previous calendar (1962), today is the commemoration of St. Valentine. St. Valentine, a priest and martyr of Rome in about 270. On the Flaminian Way, at the site of his martyrdom, Julius I built a basilica which was visited frequently. February 7-14 marks the National Marriage Week. 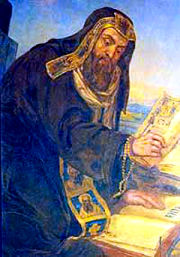 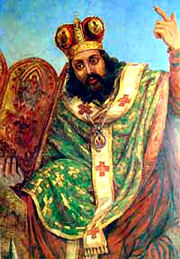 Methodius returned to Moravia and labored as a missionary among the Hungarians, Bulgarians, Dalmatians, and the inhabitants of Carinthia. Falling again under suspicion, he returned to Rome and defended the use of the Slavonic language in the liturgy. The Pope bestowed upon him the dignity of archbishop. After his return to Moravia, he converted the duke of Bohemia and his wife, spread the light of faith in Bohemia and Poland, is said to have gone to Moscow (after the erection of the See of Lemberg), and to have established the diocese of Kiev. After his return he died in Bohemia and was buried in the Church of St. Mary at Velehrad, the services being conducted in Greek, Slavonic, and Latin.

Symbols and Representation for St. Cyril: With Saint Methodius; Oriental monk holding a church with the help of Methodius; surrounded by Bulgarian converts; wearing a long philosopher's coat. 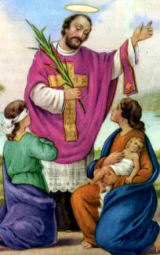 Valentine defied this decree and urged young lovers to come to him in secret so that he could join them in the sacrament of matrimony. Eventually he was discovered by the Emperor, who promptly had Valentine arrested and brought before him. Because he was so impressed with the young priest, Claudius attempted to convert him to Roman paganism rather than execute him. However, Valentine held steadfast and in turn attempted to convert Claudius to Christianity, at which point the Emperor condemned him to death.

While in prison, Valentine was tended by the jailer, Asterius, and his blind daughter. Asterius' daughter was very kind to Valentine and brought him food and messages. They developed a friendship and toward the end of his imprisonment Valentine was able to convert both father and daughter to Christianity. Legend has it that he also miraculously restored the sight of the jailer's daughter.

The night before his execution, the priest wrote a farewell message to the girl and signed it affectionately "From Your Valentine," a phrase that lives on even to today. He was executed on February 14th, 273 AD in Rome. The Martyrology says, "At Rome, on the Flaminian Way, the heavenly birthday of the blessed martyr Valentine, a priest. After performing many miraculous cures and giving much wise counsel he was beaten and beheaded under Claudius Caesar."

The church in which he is buried existed already in the fourth century and was the first sanctuary Roman pilgrims visited upon entering the Eternal City.

The valentine has become the universal symbol of friendship and affection shared each anniversary of the priest's execution—St. Valentine's Day. Valentine has also become the patron of engaged couples.

Symbols and Representation: Birds; roses; bishop with a crippled or epileptic child at his feet; bishop with a rooster nearby; bishop refusing to adore an idol; bishop being beheaded; priest bearing a sword; priest holding a sun; priest giving sight to a blind girl.