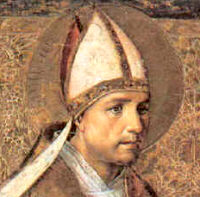 Renew in your Church, we pray, O Lord, that spirit with which you endowed your Bishop Saint Augustine that, filled with the same spirit, we may thirst for you, the sole fount of true wisdom, and seek you, the author of heavenly love. Through our Lord Jesus Christ, your Son, who lives and reigns with you in the unity of the Holy Spirit, God, for ever and ever.

According to the 1962 Missal of St. John XXIII the Extraordinary Form of the Roman Rite, today is also the feast of St. Hermes, a martyr of Rome, probably in Diocletian's persecution. He was buried in a cemetery on the Salarian Way. He is mentioned in the Depositio Martyrum of the year 354. 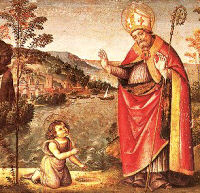 Augustine recognized this vacuum; he saw how the human heart is created with a great abyss; the earthly satisfactions that can be thrown into it are no more than a handful of stones that hardly cover the bottom. And in that moment grace was able to break through: Restless is the heart until it rests in God. The tears of his mother, the sanctity of Milan's Bishop Ambrose, the book of St. Anthony the hermit, and the sacred Scriptures wrought his conversion, which was sealed by baptism on Easter night 387. Augustine's mother went to Milan with joy and witnessed her son's baptism. It was what it should have been, the greatest event of his life, his conversion — metanoia. Grace had conquered. Augustine accompanied his mother to Ostia, where she died. She was eager to die, for now she had given birth to her son for the second time.In 388 he returned to Tagaste, where he lived a common life with his friends. In 391 he was ordained priest at Hippo, in 394 made coadjutor to bishop Valerius, and then from 396 to 430 bishop of Hippo. Augustine, numbered among the four great Doctors of the Western Church, possessed one of the most penetrating minds of ancient Christendom. He was the most important Platonist of patristic times, the Church's most influential theologian, especially with regard to clarifying the dogmas of the Trinity, grace, and the Church. He was a great speaker, a prolific writer, a saint with an inexhaustible spirituality. His Confessions, a book appreciated in every age, describes a notable portion of his life (until 400), his errors, his battles, his profound religious observations. Famous too is his work The City of God, a worthy memorial to his genius, a philosophy of history. Most edifying are his homilies, especially those on the psalms and on the Gospel of St. John. Augustine's episcopal life was filled with mighty battles against heretics, over all of whom he triumphed. His most illustrious victory was that over Pelagius, who denied the necessity of grace; from this encounter he earned the surname "Doctor of grace." As an emblem Christian art accords him a burning heart to symbolize the ardent love of God which permeates all his writings. He is the founder of canonical life in common; therefore Augustinian monks and the Hermits of St. Augustine honor him as their spiritual father. —Excerpted from The Church's Year of Grace by Pius Parsch Patron: Brewers; diocese of Bridgeport, Connecticut; Cagayan de Oro, Philippines; diocese of Kalamazoo, Michigan; printers; city of Saint Augustine, Florida; diocese of Saint Augustine, Florida; sore eyes; diocese of Superior, Wisconsin; theologians; diocese of Tucson, Arizona. Symbols: flaming heart pierced by two arrows; eagle; child with shell and spoon; word Veritas with rays of light from Heaven; chalice; dove; pen and book; scroll; scourge; model of a church; Bible opened to Romans XIII; child; shell. Things to Do: 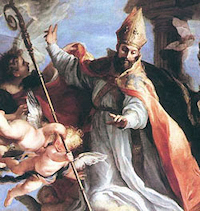 St. Hermes was prefect of Rome. Along with Pope Alexander I, he was put to death about the year 116. A cemetery on the Salerian Way bears his name. The older Roman Martyrology reads: "At Rome the birthday of St. Hermes, a man of rank, who (as the Acts of the martyr-pope St. Alexander I narrate) was first cast into prison and then beheaded along with many others. He gained the martyr's crown under the judge Aurelian." His body rests in the Church of St. Mark, Rome.