Other Titles: Third Day within the Octave of the Nativity of the Lord (Christmas) 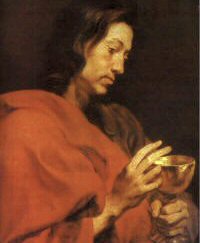 St. John, Apostle and Evangelist
St. John, the Evangelist, who is styled in the Gospel, "the beloved disciple", was a Galilean, son of Zebedee and Salome, and brother to St. James the Greater, both of whom were fishermen. The two were called by Jesus to be disciples as they were mending their nets by the Sea of Galilee.

It seems that St. John remained for a long time in Jerusalem, but that his later years were spent at Ephesus, whence he founded many churches in Asia Minor. St. John wrote his Gospel after the other Evangelists, about sixty-three years after the Ascension of Christ; also three Epistles, and the wonderful and mysterious Book of the Apocalypse or Revelation. He was brought to Rome and, according to tradition, was cast into a caldron of boiling oil by order of Emperor Domitian. Like the Three Children in the fiery furnace of Babylon, he was miraculously preserved unhurt.He was later exiled to the Island of Patmos, where he wrote the Apocalypse, but afterwards returned to Ephesus.In his extreme old age he continued to visit the churches of Asia. St. Jerome relates that when age and weakness grew upon him so that he was no longer able to preach to the people, he would be carried to the assembly of the faithful by his disciples, with great difficulty; and every time said to his flock only these words: "My dear children, love one another."St. John died in peace at Ephesus in the third year of Trajan (as seems to be gathered from Eusebius' history of the Saint); that is, the hundredth of the Christian era, or the sixty-sixth from the crucifixion of Christ, St. John then being about ninety-four years old, according to St. Epiphanus. —Excerpted from Heavenly Friends, St. Paul EditionsPatronage: against burns; against epilepsy; against foot problems; against hailstorms; against poisoning; burn victims; arms manufacturers; art dealers; authors; basket makers; bookbinders; booksellers; publishers; butchers; candle makers; compositors; editors; engravers; friendships; glaziers; government officials; harvests; lithographers; notaries; painters; papermakers; printers; saddle makers; scholars; sculptors; stationers; tanners; theologians; typesetters; vintners; writers. See CatholicSaints.info for locations that claim St. John as patron.Symbols and Representation: Cup or chalice and serpent (cup or sorrow foretold by Jesus); eagle rising out of a cauldron (refers to being a martyr of spirit, but not in deed); serpent entwined on a sword; grave; Prester John seated on tomb, with book, orb, and sword; eagle on a closed book; scroll of his Gospel; scroll of the Apocalypse; nimbed eagle; book.Highlights and Things To Do:

December 27, Feast of St. John the Evangelist
Station with Santa Maria Maggiore (St. Mary Major):
St. John, the principal evangelist of the Divinity of Christ, is also the one among the apostles whose teaching best brings out the profound changes effected in our human lives by the Incarnation of the Word; "born of God", henceforth we are to live, by grace, the very life of Christ which springs forth in us to eternal life. The reason for the station church, St. Mary Major, is easily seen; John was entrusted as a son to the Mother of God.
For Further Info:
Vatican on the Basilica
Churches of Rome
Rome Art Lover