Evangelism in a Glass

In my last post I shared some simple ideas on ways to bring different wines to enhance adult celebration of the Liturgical Year. Those thoughts were originally scribbled on the back of an envelope 10 years ago. My husband and I have enjoyed inserting a bit of the “liturgical” in sharing wine together.

I’m not the only one bringing forward the connections of Faith and drink. Two recently published books expand on my original post and present ways to connect alcoholic beverages to our Catholic Faith, the Liturgical Year and evangelization.

Drinking with the Saints 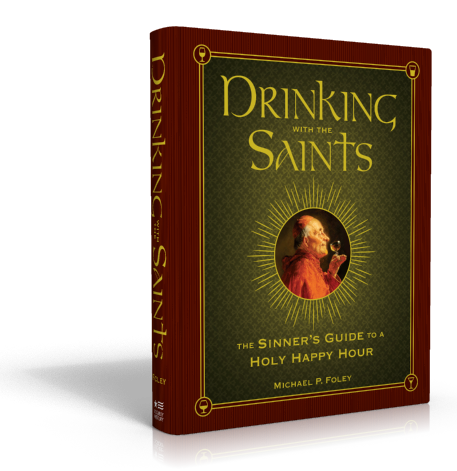 The first book is Drinking with the Saints: The Sinner’s Guide to a Holy Happy Hour by Michael P. Foley, published by Regnery History. Not only does he recognize a Catholic historical and sacramental connection with spirits, but the author recognizes there are certain drinks that are either directly linked or indirectly connected with various saints. He offers a book of over 300 carefully researched cocktail recipes, suggestions for beer, cocktails, wine and other liquor (and a few non-alcoholic drinks) related to feast days of the Liturgical Year, with an appendix including a reference to Post-Vatican II Calendar (more on this later) and a glossary of alcohol-related terms.

Ascetically, this is a book that will grace the bookshelves or the coffee table. It’s a solid book of 486 pages, with a brown hardcover and gilded lettering and design. There is a sepia image for almost every entry, and the ink and decorations keep to the warm brown theme, reminiscent of a book found in a Gentleman’s library and private bar with real wood panel walls, handcrafted wood bookshelves and mahogany and leather furniture. But there is also an eBook version available to take the book on the go.

The book is well-organized. The first section follows the Sanctoral calendar, breaking down the feasts of the saints by month. The Liturgical Seasons or Temporal Calendar is the second section, covering Advent, Twelve Days of Christmas, Epiphany and the Time Thereafter, Pre-Lent or Carnival, Lent and Eastertide, and Pentecost and Time Thereafter.

Each entry covers a saint or a feast day, with a short lighthearted background or biography and an explanation of the connection with the saint or feast with suggested drinks. For example, August 8 is the feast of St. Dominic, and the author shares a miracle St. Dominic performed with wine, then the few connections with his Order of Preachers, such as the Croatian Maraska Maraschino liqueur, “believed to have been invented by Dominican apothecaries in the early sixteenth century at the abbey at Zadar (p. 202).” The Dominicans over the centuries have earned a few nicknames, one being the “Hounds of the Lord” (a pun on their Latin name, Dominicani, the nickname being Domini Canes). Since St. Dominic is their master, the cocktail “Master of the Hounds” is a suggested drink for his feast. Another drink is related to the Dominicans being known as the Black Friars in England, so another cocktail suggestion is “Black Friars.” And then he concludes each entry with a few related beer and wine suggestions.

A helpful feature is the recipe glass illustrations by Lucinda Levine that indicate the type of cocktail glass or unique flavor for suggested drinks, such as Bloody Mary pictured with a tomato, Gibson Martini with a martini glass, St. Clements with an old-fashioned glass, and Bishops’ Wine has a punch bowl because of the large servings.

...Although any ordained priest in good standing is once again free to celebrate the traditional Latin Mass (also known as the extraordinary form of the Roman rite), most Catholics attend the new Mass and thus follow the new calendar that took effect in 1970. So why follow the old? Two reasons. First, several of the drinks in this book developed out of observing the traditional calendar. Some writers have gone so far as to say that all Western culture has more or less radiated out of the old Mass. Second, the old calendar has a larger range of entries (over seventy saints were removed from the calendar in 1970 as well as liturgical seasons like Pre-Lent), and more festivities mean more opportunities for raising and emptying a glass. That said, some of the saints canonized after 1962, such as Padre Pio and Father Damien of Molokai, have been duly added to our list of pious potables, as well as numerous local saints who never made it to the universal calendar (p. 436, Appendix I).

There is also a Drinking with the Saints app, available for IOS, Droid, Kindle and Windows. It includes a calendar that follows both the Extraordinary (Traditional) and current calendars. The app works in conjunction with the book; not all saints and drinks are listed on the app, but a few of the drinks associated with an upcoming feast are included with the ingredients, recipe and story. Also included is a searchable index of the book. Typing any name, saint, country, drink pulls up multiple possibilities. It’s a handy tool to use while at a bar or a friends’ house to have a saintly cocktail suggestion at the touch of the fingertips. 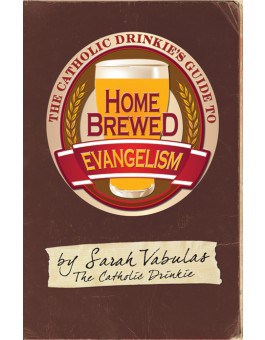 The second book is The Catholic Drinkie’s Guide to Homebrewed Evangelism by Sarah Vabulas, The Catholic Drinkie, published by Liguouri Publications. Sarah is known as the Catholic Drinkie blogger and podcaster. When I first saw her book, I thought it would mainly be about brewing beer and recipes, expanding on the beer aspect that Drinking with the Saints only slightly touched. I thought I would breeze through because the book was mainly recipes, and this is a slender paperback of 201 pages.

I underestimated the book. I read every chapter, even the recipes. Sarah utilizes the Catholic, historical and social aspects of beer and beer-brewing as a way to practice the New Evangelization in such a unique and interesting way.

Both authors recognizes the long and intimate connection the Catholic Church has had with alcohol. The first few chapters Sarah elaborates our Catholic connections with alcohol. Jesus used the humble element of wine to establish the sacrifice of the Mass that is repeated daily throughout the world. His first miracle was changing water into wine at a wedding, a social event.

History reveals monks and nuns who have improved (some would say perfected) the process of making wine, beer, and other spirits. The reasons for getting into the alcohol business were more out of necessity than pleasure. Wine was safer to drink than water for many centuries, but there was a need to provide wine (sacramental wine) for the Mass. Beer and mead were also more sanitary than drinking water and a type of nourishment during fasting times. So much of Church history can be traced through the history of alcoholic beverages, and Sarah highlight some aspects, and later shares a few patron saints of beer-brewing and winemaking and quotes from famous theologians and saints.

(As an aside, I am glad to see that neither author used that oft-repeated but never properly referenced quote, “Drink to the point of hilarity” attributed to St. Thomas Aquinas. Until someone can give me the exact citation in his writing that quote is found, I am not convinced that he ever wrote or said that. If a reader has the proper reference, please inform me!)

My favorite section is Section 2, Beer-brewing monks. Sarah provides a look at the fascinating story of the Trappist monks and their beer. Reading her description gives me the desire to pack up and visit the monasteries in Belgium to taste these flavorful brews. I find it fascinating to learn that even trying to utilize the same exact recipe, these Trappist beers can’t be duplicated because they use the well water found within their monastery walls that contains a unique mineral content.

She then applies some aspect of the lives of religious that we can apply to our own lives. I will quibble with her referencing the Benedictine spiritual reading at meals as lectio divina. Lectio divina is reading, meditating and praying always with Scripture, not other material, and not done at the mealtime. These are two separate activities. But that’s only a minor point.

What does all this have to do with the New Evangelization? Plenty, and Sarah illustrates that. She sees that finding a way to connect with others can be the beginning of leading them further on their spiritual journey. Social media is one way to do this, but she also emphasizes how we all should seek to find that balance, and not let the media overrun our own prayer lives. The need to recognize and stick to priorities is a must.

The last half of the book covers small batch homebrewing. Since Sarah lives in a one-bedroom apartment, she only has capabilities and room to make one-gallon batches, instead of the typical five-gallon. She gives basic directions to begin brewing, tips from her own experience, and a variety of one-gallon recipes to try: fruity and light-bodied, medium-bodied and dark and full-bodied beers (with personal and saint story connections), and a limoncello and mead recipe thrown in for good measure.

The books complement each other (in fact, I gave both to my brother for his birthday). Both authors do not promote drinking irresponsibly but recognize how alcohol is a gift from God to use in a temperate and balanced way. They embrace alcohol’s potential for positive social, evangelist and even personal spiritual effects if approached in prudence. These books provide ample inspiration to go beyond just drinking but rather connecting the contents of the glass to our own personal journey in Faith.

May all your further imbibements bring you closer to Christ! Cheers!