Fifth Day within the Octave of the Nativity of the Lord (Christmas); Optional Memorial of St. Thomas Becket, Bishop and Martyr 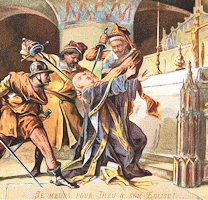 Fifth Day in the Octave of Christmas: Almighty and invisible God, who dispersed the darkness of this world by the coming of your light, look, we pray, with serene countenance upon us, that we may acclaim with fitting praise the greatness of the Nativity of your Only Begotten Son, Who lives and reigns with you in the unity of the Holy Spirit, God, for ever and ever.

Optional Memorial of St. Thomas Becket: O God, who gave the Martyr Saint Thomas Becket the courage to give up his life for the sake of justice, grant, through his intercession, that, renouncing our life for the sake of Christ in this world, we may find it in heaven. Through our Lord Jesus Christ, your Son, who lives and reigns with you in the unity of the Holy Spirit, God, for ever and ever.

Mass Propers for the Fifth Day with the Octave of Christmas
Entrance Antiphon, Jn 3:16:

God so loved the world that he gave his Only Begotten Son, so that all who believe in him may not perish, but may have eternal life.

A light of revelation to the Gentiles and glory for your people Israel.

Through the tender mercy of our God, the Dawn from on high will visit us.


This holy man fought to the death for the law of his God and did not fear the words of the godless, for he was built on solid rock.

Blessed are those who hunger and thirst for righteousness; for they will be satisfied.

Whoever wishes to come after me, must deny himself, take up his cross, and follow me, says the Lord.

Today is the Fifth day in the Octave of Christmas. The Church celebrates the Optional Memorial of St. Thomas Becket (1118-1170), bishop and martyr. He was born in London and after studying in Paris, he first became chancellor to the king and then in 1162 was chosen Archbishop of Canterbury. He went from being "a patron of play-actors and a follower of hounds" to being a "shepherd of souls." He absorbed himself in the duties of his new office, defending the rights of the Church against Henry II. This prompted the king to exile him to France for six years. After returning to his homeland he endured many trials and was murdered by agents of the king.

Fifth Day in the Octave of Christmas—Day Five

Devotion to him spread like wildfire. He was enshrined in the hearts of men, and in their arts. In statues and stained glass, in song and story this good bishop was everywhere to be found: France, Italy, Spain, Sweden. Many miracles were attributed to his heavenly advocacy.
—Excerpted from Days of the Lord

St. Thomas Becket (also known as St. Thomas of Canterbury)
Thomas Becket was born in 1118 of a merchant family. He studied in London and Paris, entered the service of Archbishop Theobald of Canterbury, became Lord Chancellor under King Henry II in 1155, and in 1162 Archbishop of Canterbury. Till then a submissive courtier, he now initiated a fearless struggle against the king for the freedom of the Church and the inviolability of ecclesiastical property, occasioning his imprisonment, exile, and finally martyrdom (December 29, 1170). Canonization came quickly (1173); in 1539 King Henry VIII ordered his remains burned.

Formerly the Breviary included this summary of the saint's last days: "Calumniators informed the king that the bishop was agitating against him and the peace of the realm; and the king retorted that with one such priest he could not live in peace. Hearing the royal displeasure, several godless courtiers agreed to do their sovereign a favor by assassinating Thomas. Secretly they traveled to Canterbury and fell upon the bishop while he was attending Vespers. His priests rushed to his aid and tried to bar the church door; Thomas opened it himself with these words: The house of God may not be defended like a fortress. I gladly face death for the Church of God. Then to the soldiers: I command it in the Name of God: No harm may be done to any of mine. Thereupon he cast himself on his knees, commended his flock and himself to God, to the Blessed Virgin Mary, to St. Denis and other holy patrons of his church, and with the same heroic courage with which he had withstood the king's laws, he bowed his holy head to the sacrilegious sword on December 29, 1170."With all the strength that is given us for the defense of God's rights, we must resist those who seek to subject the Church to their power, even if they are those to whom on other grounds we owe service. In St. Thomas of Canterbury the Church celebrates one of her great bishops; by applying to him the Gospel of the Good Shepherd she venerates in him the true pastor of Christ's flock who gave his life for his sheep.Patronage: Clergy; secular clergy; Exeter College Oxford; Portsmouth, England.Symbols: Sword through a mitre; pallium and archbishop's cross; battle axe and crosier; red chasuble; altar and sword.
Often Portrayed As: Archbishop with a wounded head; archbishop holding an inverted sword; archbishop kneeling before his murderers; archbishop being murdered in church; crosier with a battle-axe head at the topHighlights and Things to Do:
Find us on Social Media.