How the arts can help form us for Faith

Back in the late 1970s, in the early years of the quarterly interdisciplinary journal Faith & Reason (which I had founded and later brought with me to Christendom College), I sounded out readers on the wisdom of devoting an occasional issue to the arts. The subscribers were mostly hardcore Catholics who were struggling to find a voice in the chaos of the ecclesiastical collapse that marked the late 60s and 70s. Almost universally, they rejected attention to the arts because no energy should be spared from the direct defense of the faith.

I had—and still have—some sympathy for that concern, and certainly I have spent most of my life in arguing directly for the Truth. But in the long run, the refusal to foster Catholic activity in and appreciation for the arts is short-sighted. The arts are important sources of inspiration. They can nourish in us a contemplative gaze, as we formatively encounter realities which can be hinted at but never fully captured, and never reduced to mere technique. In a mechanized, technocratic culture, the arts proclaim that there are questions and answers and transcendent beauties which open out to a life beyond the surface of things.

We have come a long way from the 1970s in recognizing that the crisis of Catholicism is not just doctrinal and moral but profoundly cultural and even more profoundly personal. Our own fidelity must bear not only doctrinal and moral but also personal and cultural fruit. Few would argue any longer that it is a mere luxury to seek genuinely artistic representations of the Real. We understand, I hope, that the absence of art—or worse, bad art, unbelieving art, art without interior vision—impoverishes the spirit, not only within churches (to take the most obvious example) but in all the visual arts and in music.

When I first saw the musical version of Les Misérables, I regarded it as the most ennobling dramatic production I had ever witnessed. Great art of all kinds can trigger this response in us, because it captures our senses and fires our imagination with a greater awareness of transcendent realities (including transcendent values). With that enhanced awareness comes enhanced appreciation and even personal growth, through a kind of seeing that takes us beyond the surface—in effect a contemplative gaze. This response is not limited to explicitly religious art, though that is of vital importance. We may find a less hagiographical inspiration simply in the artist’s searching vision of created things. 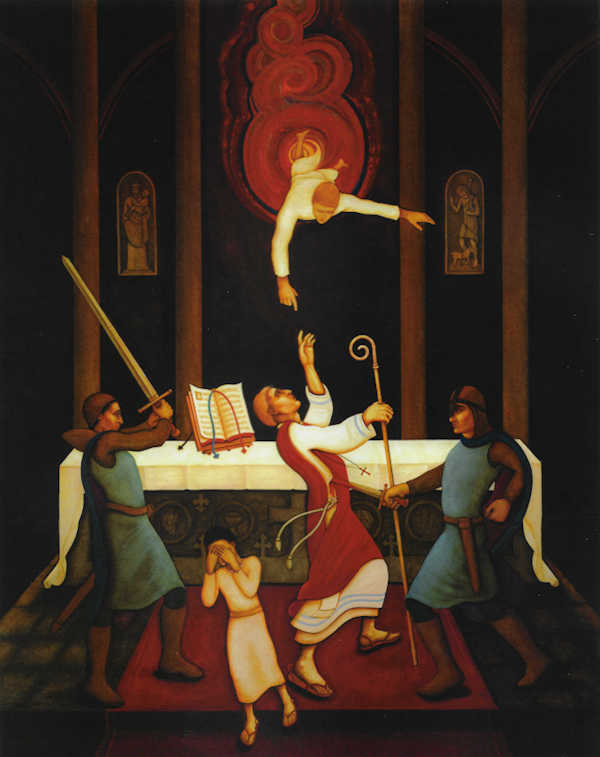 I would love to hear from readers about their favorite works of art, and the thoughts, insights and even prayers which they inspire. But what triggered these reflections today was the arrival of a beautiful coffee table book featuring The Art of Michael D. O’Brien, new from Ignatius Press. It is not my purpose to write a review; nor would I be competent to do so in any revealing depth. Instead I present it simply as an instance of genuine artistic inspiration.

O’Brien is probably best known in our circles as a novelist. Among other works, he has authored the Children of the Last Days series (also from Ignatius Press), including such titles as Strangers and Sojourners and Father Elijah. Many of us did not know that O’Brien is by training a painter whose work may be found in quite a few churches, monasteries and abbeys. This new book explores his painting with commentary by the artist and religious scholar Dr. Clemens Cavallin of the University of Gothenburg, Sweden. (Cavallin also authored O’Brien’s biography, On the Edge of Infinity.)

Although O’Brien has significant range, much of his work is influenced by Byzantine art. I have chosen to include here just one painting that caught my attention particularly when leafing through the book for the first time. It is the Martyrdom of St. Thomas Becket, which the artist painted in 2004.

Now O’Brien is not my very favorite painter—a phrase unintended to lessen any appreciation of his merit. I confess a partiality to the Renaissance Italian, Raphael. And to speak of themes which are not explicitly religious, my wife and I both love the work of the late nineteenth and early twentieth century American, Mary Cassatt, who painted so many children with their mothers. We have two of her paintings (most emphatically not originals) on our living room wall. I ponder the wonder of the human family, with all its workings of grace, more deeply every time I see them. But readers will have their own favorites, and we should share them.

Meanwhile, let us hope Catholics will never be Philistines. There is a special spark of grace in artists, a spark of divinity which we all share in different ways through the very nature of our being. It can even be operative in tortured souls, but it yearns always for a kind of deepening into wholeness. Thus the arts help us to see things we might otherwise gloss over or miss entirely. In the making of art and in its genuine appreciation, we find a human form of contemplation which God knows best how to use to draw us to Himself—the via pulchritudinis, the way of beauty.

Too often in our modern sterility, art has degenerated into a habit of making explicit statements, or of striving aimlessly for individual difference, or of shocking, of novelty, of pretense in either artist or owner. Such choices also reveal something about the soul. But the soul is Catholic territory. It is ours not to impoverish, but to enrich in every way.