St. Dominic: May Saint Dominic come to the help of your Church by his merits and teaching, O Lord, and may he, who was an outstanding preacher of your truth, be a devoted intercessor on our behalf. Through our Lord Jesus Christ, your Son, who lives and reigns with you in the unity of the Holy Spirit, God, for ever and ever.

The Roman Martyrology commemorates Sts. Cyriac, Largus and Smaragdus. St. Largus and St. Smaragdus are two Roman martyrs. They were buried at first on the Ostian Way. Their bodies were later transferred, after the peace of Constantine, to a church built near the baths of Diocletian by a Christian of the name of Cyriacus. The cult of St. Cyriacus has been joined to that of the two martyrs. The Fourteen "Auxiliary Saints" or "Holy Helpers" are a group of saints invoked because they have been efficacious in assisting in trials and sufferings. Each saint has a separate feast or memorial day, and the group was collectively venerated on August 8, until the 1969 reform of the Roman calendar, when the feast was dropped. 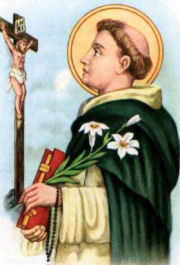 Popular piety has numbered St. Cyriac among the "Fourteen Holy Helpers." The existence of a martyr with this name seems well attested by the trustworthy Depositio Martyrum of 354. The remaining details in the above account are pure fiction. But the story may bring to mind that endless series of heroic souls who suffered for Christ even more dreadful tortures than those fiction describes.—Excerpted from The Church's Year of Grace, Pius Parsch 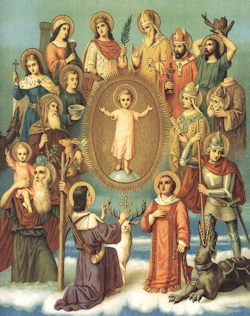