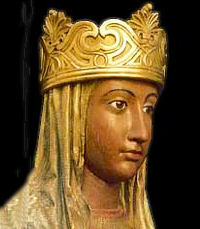 Grant, we pray, almighty God, that, celebrating the mysteries of the Lord's Resurrection, we may merit to receive the joy of our redemption. Through our Lord Jesus Christ, your Son, who lives and reigns with you in the unity of the Holy Spirit, God, for ever and ever.

According to the Roman Martyrology, today is the feast of St. Zita of Lucca, a virgin who died in 1278.Today is the feast of Our Lady of Montserrat. Monserrat is located in the region of Catalonia in Spain. Legend relates that the original sculpture was carved by St. Luke and brought to Montserrat by St. Peter in 50 A.D. St. Ignatius of Loyola, a former Crusader, decided to become a missionary after having prayed before this image of Mary.

Our Lady of Montserrat
The origin of the devotion to Our Lady at the shrine of Montserrat according to the earliest written records dates from 932, when the Count of Barcelona confirmed and renewed an endowment to the shrine made by his father in 888. This gift was again confirmed in 982 by Lothaire, King of France. Constant and unbroken tradition is that even previous to 888, an image of Our Lady was miraculously found among the rocks of Montserrat. Montserrat itself is a fantastic mountain group, four thousand feet high, about twenty miles from Barcelona. The name, Montserrat, of Latin origin, means saw-edged mountain. It is formed by huge boulders that raise their immense bulk perpendicularly to that four thousand foot summit. Outwardly, it resembles the seemingly inaccessible monasteries seen on high Mount Athos in Greece: "Montserrat is, and will forever be, a source of deep impressions caused by the singularity of the place. There, what is material becomes cyclopean, the mysterious is turned mystical and the picturesque is promoted to sublimity." There is a story that the mountain was once a huge boulder with a smooth surface. At the time of the Crucifixion of Jesus, however, when the sun darkened, the rock was shaken to its very foundations and when light returned, the mountain had a thousand peaks.

The legend relates that the figure of Our Lady came from Jerusalem to Barcelona, and was brought into the mountains to save it from the Saracens. It is true that the Montserrat statue has oriental features, but this could well be traced to the Byzantine sculptors who were constantly employed in the West. The legend goes on to say that in the eighth century shepherds one night saw strange lights on the mountain and heard Seraphic music. Guided by the shepherds, the Bishop of Manresa found, in a cavern, a wooden figure of Our Lady and the Holy Child. He ordered that the statue be carried into the cathedral immediately. However, the procession with the statue never reached the cathedral because, after much marching, the small wooden figure became too heavy so that the Bishop decided to accept it as a sign and left it in a chapel of a nearby hermitage. The statue remained there until a church was built on the site of the present abbey on the top of the rocks near where the statue was discovered. Since that incident, this statue is the most celebrated, the most important of Spain; it is thirty-eight inches in height, and is known as "La Morenata" — The Little Black Madonna. The wood is now black with age; one of its most striking features is the dignified expression of Our Lady. In her right hand, she holds a majestic orb. Excerpted from Shrines to Our Lady, Zsolt Aradi Things to Do:

Excerpted from Saints Calendar and Daily Planner by Tan BooksPatron: Domestic workers.Things to Do: