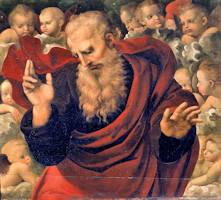 Grant your faithful, we pray, almighty God, the resolve to run forth to meet your Christ with righteous deeds at his coming, so that, gathered at his right hand, they may be worthy to possess the heavenly Kingdom. Through our Lord Jesus Christ, your Son, who lives and reigns with you in the unity of the Holy Spirit, God, for ever and ever.

For Catholics, the new Liturgical Year commences with the first Sunday of Advent. In this new liturgical year, the Church not only wishes to indicate the beginning of a period, but the beginning of a renewed commitment to the faith by all those who follow Christ, the Lord. This time of prayer and path of penance that is so powerful, rich and intense, endeavors to give us a renewed impetus to truly welcome the message of the One who was incarnated for us. In fact, the entire Liturgy of the Advent season, will spur us to an awakening in our Christian life and will put us in a ‘vigilant’ disposition, to wait for Our Lord Jesus who is coming:

‘Awaken! Remember that God comes! Not yesterday, not tomorrow, but today, now! The one true God, "the God of Abraham, Isaac and Jacob", is not a God who is there in Heaven, unconcerned with us and our history, but he is the-God-who-comes.’1

The Season of Advent is therefore a season of vigilant waiting, that prepares us to welcome the mystery of the Word Incarnate, who will give the ‘Light’ to the womb of the Virgin Mary, but essentially this time prepares us not only to welcome this great event but to incarnate it in our lives. We could say that the true light enters the world through the immaculate womb of Mary but it does not stay there. On the contrary, this light flows out into our dark, obscure, sinful lives to illuminate them, so that we can become the light that illuminates the world. For this reason, let us live this time of waiting not only to celebrate a historical memory but to repeat this memory in our lives and in the service of others. To wait for the Lord who comes, means to wait and to watch so that the Word of Love enters inside us and focuses us every day of our lives.

As Blessed John Henry Newman reminded us in a homily for the Advent Season: “Advent is a time of waiting, it is a time of joy because the coming of Christ is not only a gift of grace and salvation but it is also a time of commitment because it motivates us to live the present as a time of responsibility and vigilance. This ‘vigilance’ means the necessity, the urgency of an industrious, living ‘wait’. To make all this happen, then we need to wake up, as we are warned by the apostle to the Gentiles, in today's reading to the Romans: ‘Besides this you know what hour it is, how it is full time now for you to wake from sleep. For salvation is nearer to us now than when we first believed” (Rm 13:11).We must start our journey to ascend to the mountain of the Lord, to be illuminated by His Words of peace and to allow Him to indicate the path to tread (cf. Is 2:1-5). Moreover, we must change our conduct abandoning the works of darkness and put on the ‘armor of light’ and so seek only to do God’s work and to abandon the deeds of the flesh (cf. Rm 13:12-14). Jesus, through the story in the parable, outlines the Christian life style that must not be distracted and indifferent but must be vigilant and recognize even the smallest sign of the Lord’s coming because we don’t know the hour in which He will arrive (cf. Mt 24:39-44)1 Pope Benedict XVI, Celebration of First Vespers of Advent, Vatican Basilica, December 2006Excerpted from the website of Congregation for the ClergyClick here for commentary on the readings in the Extraordinary Form of the Roman Rite.

The traditional Collect (or opening prayer) of the last Sunday of the Church year began "Stir up the wills of Thy faithful people, we beseech Thee, O Lord..." With this request to God to "stir up" our wills, this day was traditionally called Stir-Up Sunday. Because the Ordinary Form celebrates the Solemnity of Christ the King on the last Sunday of the year, "Stir-Up Sunday" is often the First Sunday of Advent. The traditional Collect of the First Sunday is asking God to stir up His might: "Stir up Thy might, we beg Thee, and come." Many families create a traditional plum pudding or fruit cake or some other recipe that all the family and guests can "stir-up." This activity of stirring-up the ingredients symbolizes our hearts that must be stirred in preparation for Christ's birth.What You Need to Know About AdventA short explanation of the Advent season and its significance in the Liturgical Year.The History, Customs and Folklore of AdventResources for Celebrating Advent in the Home Jesse Tree InstructionsJesse Tree ~ Day 1, Creation 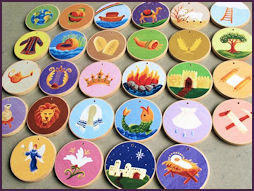 Jesse Tree Overview
The Jesse Tree dates back to the middle ages and came from Europe. Even some ancient cathedrals have Jesse Tree designs in their stained glass windows. The "tree" is usually a branch or sapling and is decorated with various symbols that remind us of the purpose and promises of God from Creation to the Birth of Jesus Christ.

Jesse was the father of King David and God promised David that his Kingdom would last forever. Two centuries after the death of King David, God spoke through the prophet Isaiah and said:

Each Jesse Tree ornament usually consists of a handmade symbol or drawing that represents one of the major stories of the Old Testament along with a brief verse of Scripture from that story. 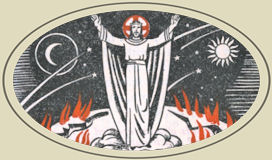 Commentary for the Readings in the Extraordinary Form:
First Sunday of Advent
"There will be signs in the . . .(heavens). . .and upon the earth, distress of nations. . .they will see the Son of Man coming. . .lift up your heads, because your redemption is at hand" (Gospel).

On His second Advent at the end of the world Jesus will come in the fullness of Divine Power. Then will we be obliged to accept Him as King of Justice. So today let us begin to prepare for this year's anniversary of His first Advent as King of Mercy.Because His coming is "nearer" we are warned to "rise from sleep,. . .lay aside the works of darkness. . .and put on he Lord Jesus Christ" (Epistle).Aware of the dangers ahead during this preparation, we call upon His "power" to protect us (Prayer) and to "cleanse us" (Secret). Finally, we promise to "prepare with due reverence for the coming festival" (Postcommunion).—Excerpted from My Sunday Missal, Confraternity of the Precious Blood
Roman Station Churches of Advent and Christmas

First Sunday of Advent
Station with Santa Maria Maggiore (St. Mary Major):
We enter the house of God. Mary, God's Mother, is preparing the crib in which to lay her Son; she comes to meet us. What a beautiful model of preparation! The stational church is St. Mary Major at the Crib and its stational Saint meets us! Already on this first day of preparation for Christmas, we see the Mother of God at the crib! Mary now leads us to the altar, where she speaks to us and leads us in prayer. We ask our blessed Mother Mary, the fruitful earth fecundated by the goodness of the Lord, the patroness on the first day of the New Year as well as on this first day of Advent, to obtain for us the grace to prepare with becoming honor for the approaching solemnity of our redemption. Mary is the highest expression, the perfect model of true Advent spirit. On this account do we begin our Advent observance in the great Marian Church Ad praesepe, at the crib. To the Christians of Rome this church was Bethlehem. In 342 A.D. it was built to commemorate the Council of Ephesus, and dedicated to the Mother of God. Our best model for the Advent-Christmas season is, surely, Mary our Mother (adapted from Pius Parsch, OSB, The Church's Year of Grace and Martin Hellriegel, Vine and Branches).
For more information, see:
Vatican on the Basilica
Churches of Rome
Rome Art Lover