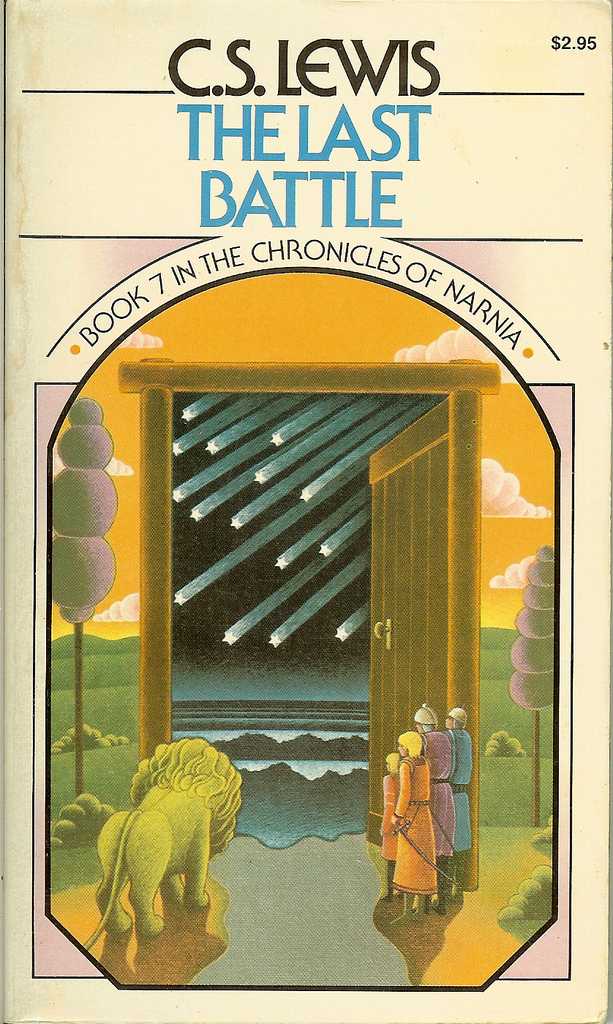 Several years ago my sons and I listened quite slowly to the whole series of Narnia by C. S. Lewis on audio in our car. It was a delightful journey. We really enjoyed the British readers for the series. I’m usually hesitant to buy audio cds, but this was an excellent investment. My sons are always ready to listen all over again.

At that time, just by coincidence, we listened to the last book, The Last Battle read by Patrick Stewart, during Advent. The themes of the book fit quite nicely into the themes of Advent.

This past weekend during our family’s road trip, we decided to listen again to The Last Battle as Advent reading.

The Church’s focus during Advent is remembering or reliving the historical coming of Christ, and preparing our hearts for His Second Coming (and His daily coming in Grace and in the Eucharist). It is the eschatological aspect that especially strikes me in the Advent liturgy. Our preparation in Advent is for the end of time, Parousia, when “God will be all in all.” The Last Battle has this eschatological focus, with the story unfolding about the “End Times” of Narnia. It is easy to enter into the emotions of the characters, walking with them during the “end times.”

So much of the book echoes the Gospel readings we have been hearing in the last weeks of Ordinary Time and the beginning of the new Liturgical Year in Advent.

The story opens up with an animal posing as Aslan. He is the “Anti-Aslan” similar to what we would call the “Anti-Christ” from the book of Revelation. The main characters discover there is an Anti-Aslan and their country is being taken over by an enemy. They suddenly realize they are living in very dark and dreadful times:

Suddenly the King leaned heard on his friend’s [unicorn] neck and bowed his head.
“Jewel,” he said, “What lies before us? Horrible thoughts arise in my heart. If we had died before to-day we should have been happy.”
“Yes,” said Jewel. “We have lived too long. The worst thing in the world has come upon us.”

And later the small wood animals that help comfort their King Tirian of Narnia:

“Ah, that’s bad isn’t it?” said the second Mouse. “It would have been better if we’d died before all this began.”

The Gospel verses below roll in my head as I listen to the book. The last Thursday in Ordinary Time (34th week) we read Luke 21:20-28. In Year C on the 33rd Sunday this Gospel is repeated. These excerpts in particular strike at the “end times”:

Woe to pregnant women and nursing mothers in those days,
for a terrible calamity will come upon the earth
and a wrathful judgment upon this people.
They will fall by the edge of the sword
and be taken as captives to all the Gentiles;
and Jerusalem will be trampled underfoot by the Gentiles
until the times of the Gentiles are fulfilled.

There will be signs in the sun, the moon, and the stars,
and on earth nations will be in dismay,
perplexed by the roaring of the sea and the waves.
People will die of fright
in anticipation of what is coming upon the world,
for the powers of the heavens will be shaken.

Beginning with Advent, this year’s Sunday Lectionary is Year B, following the Gospel of Mark. The first Sunday of Advent we heard:

Jesus said to his disciples:
“Be watchful! Be alert!
You do not know when the time will come.
It is like a man traveling abroad.
He leaves home and places his servants in charge,
each with his own work,
and orders the gatekeeper to be on the watch.
Watch, therefore;
you do not know when the Lord of the house is coming,
whether in the evening, or at midnight,
or at cockcrow, or in the morning.
May he not come suddenly and find you sleeping.
What I say to you, I say to all: ‘Watch!’“ (Mark 13:33-37).

Examples of preparation, being alert and watchful are throughout the book. Even if these were sad times, they were not going to relax.

As the King and unicorn try to sort out how could their Aslan be so opposite to what he should be, they still had to comply to his wishes:

“He is not a tame Lion,” said Tirian. “How should we know what he would do? We, who are murderers. Jewel, I will go back. I will give up my sword and put myself in the hands of these Calormenes and ask that they bring me before Aslan. Let him do justice to me.”

“You will go to your death, then,” said Jewel.

“Do you think I care if Aslan dooms me to death?” said the King. “That would be nothing, nothing at all. Would it not be better to be dead than to have this horrible fear that Aslan has come and is not like the Aslan we have believed in and longed for? It is as if the sun rose one day and were a black sun.”

“I know,” said Jewel. “Or as if you drank water and it were dry water. You are in the right, Sire. This is the end of all things. Let us go and give ourselves up.”

“There is no need for both of us to go.”

“If ever we loved one another, let me go with you now,” said the Unicorn. “If you are dead and if Aslan is not Aslan, what life is left for me?”

They turned and walked back together, shedding bitter tears.

Later, even when the Anti-Aslan is exposed as an imposter, it doesn’t solve the matter, but exposes an even worse situation:

The King had his arm on the Unicorn’s shoulder and sometimes the Unicorn nuzzled the King’s cheek with his soft nose. They did not try to comfort one another with words. It wasn’t very easy to think of anything to say that would be comforting. Tirian had never dreamed that one of the results of an Ape’s setting up a false Aslan would be to stop people from believing in the real one. He had felt quite sure that the Dwarfs would rally to his side the moment he showed them how they had been deceived. And then next night he would have led them to Stable Hill and shown Puzzle to all the creatures and everyone would have turned against the Ape and, perhaps after a scuffle with the Calormenes, the whole thing would have been over. But now, it seemed, he could count on nothing. How many other Narnians might turn the same way as the Dwarfs?

Even though we are preparing (or experiencing) the End Timess it does not need to be gloomy or fearful or full of anxiety. Christ brings us comfort and strength to endure, just like King Tirian:

And still there was no change in the night or the wood, but there began to be a kind of change inside Tirian. Without knowing why, he began to feel a faint hope. And he felt somehow stronger.

The story continues with the actual last battle of Narnia in defeat. The great lion, the true Aslan, does return and Narnia comes to an end. With that end, came the Last Judgment:

The creatures came rushing on, their eyes brighter and brighter as they drew nearer and nearer to the standing Stars. But as they came right up to Aslan one or other of two things happened to each of them. They all looked straight in his face; I don’t think they had any choice about that. And when some looked, the expression of their faces changed terribly—it was fear and hatred: except that, on the faces of Talking Beasts, the fear and hatred lasted only for a fraction of a second. You could see that they suddenly ceased to be Talking Beasts. They were just ordinary animals. And all the creatures who looked at Aslan in that way swerved to their right, his left, and disappeared into his huge black shadow, which (as you have heard) streamed away to the left of the doorway. The children never saw them again. I don’t know what became of them. But the others looked in the face of Aslan and loved him, though some of them were very frightened at the same time. And all these came in at the Door, in on Aslan’s right....

With the Final Judgment comes the enjoyment of Parousia. We often talk about Parousia in Levels II and III in the CGS Atrium. What will it be like? The answers are that everything will be in the superlative: the most beautiful place, the most wonderful food, all peaceful, complete happiness. But then the children have their own questions. What will heaven look like? What will it feel like? Will it be like this world, only better? C.S. Lewis describes what he thinks it will be:

“The Eagle is right,” said the Lord Digory. “Listen, Peter. When Aslan said you could never go back to Narnia, he meant the Narnia you were thinking of. But that was not the real Narnia. That had a beginning and an end. It was only a shadow or a copy of the real Narnia, which has always been here and always will be here: just as our own world, England and all, is only a shadow or copy of something in Aslan’s real world. You need not mourn over Narnia, Lucy. All of the old Narnia that mattered, all the dear creatures, have been drawn into the real Narnia through the Door. And of course it is different; as different as a real thing is from a shadow or as waking life is from a dream....”

It is as hard to explain how this sunlit land was different from the old Narnia, as it would be to tell you how the fruits of that country taste.... The difference between the old Narnia and the new Narnia was like that. The new one was a deeper country: every rock and flower and blade of grass looked as if it meant more. I can’t describe it any better than that: if you ever get there, you will know what I mean.

It was the Unicorn who summed up what everyone was feeling. He stamped his right fore-hoof on the ground and neighed and then cried:

“I have come home at last! This is my real country! I belong here. This is the land I have been looking for all my life, though I never knew it till now. The reason why we loved the old Narnia is that it sometimes looked a little like this. Bree-hee-hee! Come further up, come further in!”

I kept finding myself identifying with the story. Narnia is a fictional place, and not as complicated as our world, but it is easy to find similarities in our world, in personal relationships, and in spiritual relationships with Christ (Aslan).

C.S. Lewis’ The Last Battle is a great reminder of what that “preparation” of Advent is (as we heard this Sunday, “Prepare the way of the Lord”), and why we need to be “watchful and alert” (from the First Sunday of Advent). Our Advent is not just preparing for an event that has already happened (Christ being born in Bethlehem) but also the event to come, the Second Coming.