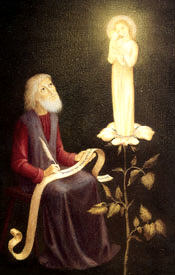 In 490, Bishop Perpetuus of Tours officially declared Advent a penitential season in the Frankish Church of Western Europe, ordering a fast on three days of every week from November 11 (the feast of St. Martin of Tours) till Christmas. This forty days' fast, similar to Lent, was originally called Quadragesima Sancti Martini (Forty Days' Fast of Saint Martin's). The Readings for the Eucharistic Liturgies were taken from the Masses of Lent.

By contrast, the Advent season of the Roman liturgy, developing a century after that of the Frankish Church, was a non-penitential, festive and joyful time of preparation for Christmas. When the Church unified the liturgical season, the non-penitential nature of the Roman Advent conflicted with the longer and penitential Gallic Advent. By the thirteenth century a compromise was reached, which combined the fasting and penitential character of the Gallic observance with the Mass texts and shorter four-week cycle of the Roman Advent liturgy. The liturgy of Advent remained substantially unaltered until Vatican II mandated a few minor changes to more clearly delineate the spirit of the Lenten and Advent seasons.

Customs and Folklore
The most perfect way to embrace the spirit of Advent is to attend daily Mass and pray the Liturgy of the Hours. If this is not possible, try smaller goals, such as attending one extra mass during the week; praying the Saturday Evening Prayer with the family in preparation for Sunday; reading and discussing the readings of the Mass of the day with the family.

The members of the domestic church should also try to receive the Sacrament of Penance during the Advent season to prepare for the coming of Christ “for it is not possible coherently to celebrate the birth of him ‘who saves his people from their sins’ without some effort to overcome sin in one’s own life.” (Directory on Popular Piety, #105) 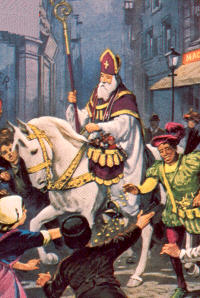 There are many customs that can be incorporated in the domestic church to teach and reinforce the Advent spirit. For example, the first Sunday of Advent is a good time for each family member to choose a secret "Christkindl" or Christ Child for whom he or she will perform little acts of love — such as a prayer, a small gift, a sacrifice, a note or a piece of candy — throughout Advent.

Another such Advent practice is that of having an empty crib or manger, which each family member will soften with straw earned by a sacrifice, a prayer or a work of mercy. After Christmas, the family will gather before the Infant Savior, in his now-padded crib, for their evening prayers or for Scripture reading.

In the Activities section you will find suggestions and directions for such customs as Preparing the Manger, an Advent Wreath, Christmas Novena, and the O Antiphons, the Jesse Tree and the Advent calendar. All these traditions involve a countdown, or some action performed each day in anticipation of Christ’s birth.

When employing new Advent customs within your domestic church it is important to remember that they are only aids, not goals in themselves. With joyful hope and anticipation, then, let us prepare for the coming of the Son of God, praying with the Church: Come, Lord Jesus, do not delay!