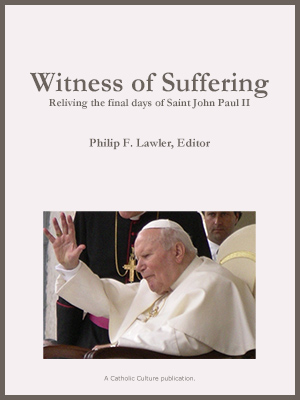 Faced with a debilitating disease, Saint John Paul II chose not to suffer in privacy, but to let the entire world watch his struggle. Inevitably he would lose the fight against his illness. But in the process he would offer a personal testimony to the value of suffering. The last weeks of his life became a powerful drama, reaching its emotional climax as the world stood vigil—somber, prayerful, expectant—during his last hours. This collection of headline stories, from the weeks leading up to his death, recaptures the drama and offers readers another opportunity to reflect on the beloved Pontiff’s final gift to the Church: his suffering.