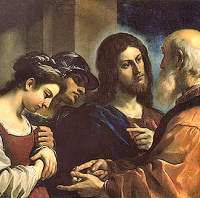 The poor forlorn beggar (to the right in the picture), looking at the departing Christ, Whose shadow may still be seen, is a symbol of us beholding the veiled crucifix on the altar today. Christ voices His terrifying analysis of those who ignore His miracles, His sinlessness: "The reason why you do not hear is that you are not of God."

"Let the one among you who is without sin be the first to throw a stone at her." Jesus did not deny the Scribes and Pharisees the right to carry out this prescription of the Law, but he insisted on one condition, namely, that they have no sin on their consciences. When Jesus and the woman were left alone, he looked up and said, "Woman, where are they?" Ironically, the self-righteous observers of the Law, so eager to throw stones, could not measure up to the requirement that Jesus had laid down.Previously called "Passion Sunday", this Sunday marks the beginning of Passiontide, a deeper time of Lent. This is the third Sunday of the scrutinies for the preparation of adult converts, and the final Sunday of Lent before the beginning of Holy Week. The Liturgy of the Word of this day speaks of re-creation, resurrection, and new life. The feast of St. John the Baptist de la Salle, which is ordinarily celebrated today, is superseded by the Sunday liturgy.Click here for commentary on the readings in the Extraordinary Form of the Roman Rite.Stational Church

Fifth Sunday of Lent
Station at St. Peter (San Pietro in Vaticano):
In the Extraordinary Form, this would be Passion Sunday. All Station Churches for Sundays in Lent were held at basilicas of Rome, but the major basilicas particularly for the first, fifth and sixth Sundays of Lent. The original church was erected on the site of the Roman Circus built by the Emperor Caligula around the year A.D. 40. and where St. Peter was crucified and placed upside down at his request and later buried here.

From the PNAC: "Rightly has Pope Benedict XVI spoken of this basilica as the heart of the Roman Church, as St. John Lateran is the head. It is here that the Church honors her first shepherd in this city, and here that since his martyrdom she has celebrated both his witness and the God he served. While the basilica before us is relatively modern as far as the history of Christianity goes, being completed only in 1626, Christians have been coming to this site to ask for his intercession since shortly after the death of the Prince of the Apostles, as messages left by them on the wall of his grave attest."

The poor forlorn beggar (to the right in the picture), looking at the departing Christ, Whose shadow may still be seen, is a symbol of us beholding the veiled crucifix on the altar today. Christ voices His terrifying analysis of those who ignore His miracles, His sinlessness: "The reason why you do not hear is that you are not of God."Aware how much He will endure from an unholy nation on the hill of Calvary (Introit), Jesus appeals to His Eternal Father, recalling how "they have fought against me from my youth" (Gradual). Yet for them, for us, He will shed His Precious Blood to "cleanse (our) conscience from dead works to serve the living God" (Epistle).Excerpted from My Sunday Missal, Confraternity of the Precious Blood