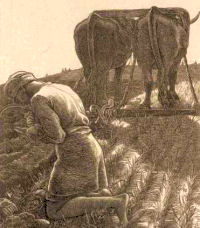 Today is the feast of St. Martha which is superseded by the Sunday Liturgy.Click here for commentary on the readings in the Extraordinary Form of the Roman Rite.

Commentary on the Readings for the Tenth Sunday after Pentecost
"The Pharisee stood and began to pray. . .'O God. . .I am not like the rest of men. . .' But the publican. . .kept striking his breast, saying, 'O God, be merciful to me the sinner'" (Gospel).

Pride is the curse of our day! The Pharisee, self-sufficient, self-righteous, wants the applause of men, while pretending to honor God. A hypocrite! Yes, he does refrain from some misdeeds but he but he neglects the essence of religion, love for God and neighbor. And he measures himself not by the All-Perfect God, but by imperfect men.Humility is our salvation! The publican confesses his misuse of grace, appeals for pardon, shows a willingness to atone. For him God will "multiply. . .mercy" (Prayer). From him He will "accept the sacrifice. . .upon (the) altar" (Communion Verse).God is the source of all "gifts," intended to lead us and others back to Himself, not to "dumb idols" (Epistle).Excerpted from My Sunday Missal, Confraternity of the Precious Blood
Stay in Touch!
Subscribe to Insights...free!
News, analysis & spirituality by email, twice-weekly from CatholicCulture.org.