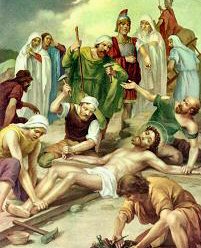 According to the 1962 Missal of Bl. John XXIII the Extraordinary Form of the Roman Rite, today is the feast of St. Louise de Marillac. She was born in 1592, and married in 1613. When her husband died she made a vow of widowhood and devoted herself entirely to works of charity. St. Vincent de Paul, who became her spiritual director, gradually initiated her into his own charitable works for the poor and afflicted, and in 1639 they founded the Congregation of the Daughters of Charity to which St. Louise dedicated the rest of her life. She was canonized by Pope Pius XI on March 11, 1934. 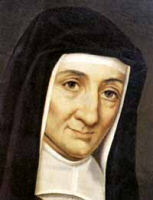 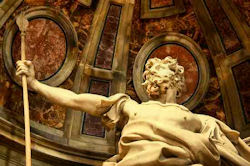 St. Longinus was the Roman centurion who pierced the side of Christ with a lance. He is said to have converted to Christianity after experiencing the darkness after Christ's death.

St. Luke tells us that the centurion "gave praise to God", and exclaimed, "Truly this was an upright man." (Luke 23:47)What was believed to be the Holy Lance of Longinus, was given to Innocent VIII in 1492.Things to Do:

Monday of the Fourth Week of Lent, Station with Santi Quattro Coronati (Four Crowned Saints):
Approaching the medieval gateway of this ancient church, dedicated to the Four Crowned Saints, one immediately gathers that this is a unique place. Indeed it is, for though it stands only a few blocks from some of the busiest areas of the city, this oft-forgotten church holds centuries of tradition within its scarred walls. The title of this church is actually in reference to two groups of martyrs from the Roman persecutions. The first group were four soldiers, Severus, Victorinus, Carpophorus, and Severinus, who refused to take part in pagan worship, and were killed for this in the persecutions of Diocletian. The name of this church may be derived from a military decoration of a small crown, which the four soldier saints may have earned during their service. The second group were a group of five stonemasons, Claudius, Nicostratus, Sempronianus, Castor, and Simplicius, who were put to death for their refusal to carve a statue of Asclepius which would be used for pagan worship. (See PNAC for more details.)