Memorial of St. Leo the Great, Pope and Doctor of the Church 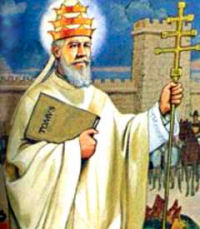 Memorial of St. Leo the Great: O God, who never allow the gates of hell to prevail against your Church, firmly founded on the apostolic rock, grant her, we pray, that through the intercession of Pope Saint Leo, she may stand firm in your truth and know the protection of lasting peace. Through our Lord Jesus Christ, your Son, who lives and reigns with you in the unity of the Holy Spirit, God, for ever and ever.

The Lord established for him a covenant of peace, and made him the prince, that he might have the dignity of the priesthood for ever.

Come after me, says the Lord, and I will make you fishers of men.

Peter said to Jesus: You are the Christ, the Son of the living God. And Jesus replied: You are Peter, and upon this rock I will build my Church.

Today the Church celebrates the Memorial of St. Leo the Great, pope and doctor (400-461), during whose pontificate the Council of Chalcedon (451) defined that Christ is one divine person with two natures, divine and human. It was a confirmation of his Epistola Dogmatica (Tomus) to the Patriarch Flavian of Constantinople. He vigorously defended the unity of the Church. He detained the onrush of the barbarians under Attila.

The Roman Martyrology also commemorates St. Andrew Avellino (1521-1608). He was born in Sicily and died at Naples. As a cleric he went to Naples to study law, and was meanwhile raised to the priestly dignity. 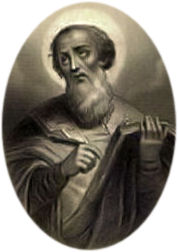 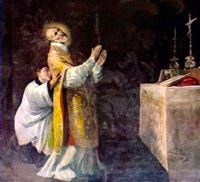 Lancellotto Avellino, the future Sant'Andrea, was born in Castronuovo, in Potentino in 1521. As a young priest he served at an ecclesiastical court. While making a defense, a small lie slipped by his lips; soon afterward he accidentally read the words, "A lying mouth kills the soul" (Wis. 1:11). Deeply moved, he resigned his position and dedicated himself solely to the service of God and the welfare of souls. In 1566 he entered the Order of Theatines and chose the name Andrew out of love for the Cross of Christ. He was master of novices for ten years, from 1560 to 1570. He labored most zealously as a shepherd of souls. With fatherly love and prudence he spent countless hours hearing confessions. Subsequently he worked between Milan and Piacenza at the houses of the Teatini in the two centers to preach the saving message of the Gospel.

He died celebrating Mass on November 10, 1608.By means of miracles God Himself often glorified the love of neighbor burning in the heart of His holy priest. Once as he was returning home from a round of duties, the rain and wind extinguished the lantern he was carrying. He and his companion, however, were not soaked by the downpour. In fact, rays of light proceeded from his body and guided them through the dense darkness. Many came to him to settle cases of conscience, his letters number thousands. Worn out by work and enfeebled by age, he suffered a stroke at the foot of the altar just as he was beginning holy Mass and died as he repeated for the third time, "I will go unto the altar of God." He is venerated as patron against sudden death.—Excerpted from The Church's Year of Grace, Pius ParschPatron: Against sudden death; apoplexics; apoplexy; for a holy death; Naples, Sicily; stroke victims; strokes.Things to Do:
Find us on Social Media.