The Children’s Guide to the Papacy

Magnificat and Ignatius Press have teamed up to publish a striking children’s book entitled Our Holy Father, the Pope. As the subtitle indicates, it briefly covers “the Papacy from Saint Peter to the Present”. The text is by Don R. Caffery, a father who decided to write this book because he could not find anything along the same lines for use with his own children. Emmanuel Beudesson, a French artist, was chosen to do the illustrations.

The oversize book—in the classic children’s size of 8.5” x 12”—features full-page illustrations (or sometimes page-plus) next to which the text is presented, or sometimes superimposed. The text itself is Scripturally rich, and the case for both the Divine institution and immediate historicity of the papacy is well-made, along with the special powers and responsibilities intrinsic to it.

For younger children, of course, the text would be read by a parent or other adult, but while the text is certainly not “simplistic”, it is simplified sufficiently for young readers to tackle on their own before they get too old for picture books. For example, the section on “The Keys of the Kingdom” begins as follows: 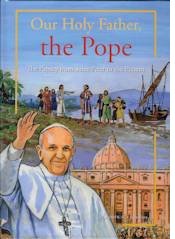 “Then Jesus said to Peter, ‘I will give you the keys of the kingdom of heaven.’“

“Jesus has the keys of the kingdom of heaven. In giving us His Church, Jesus gave us the way to heaven. Giving Peter His keys meant that Jesus gave Peter authority over His Church.”

The text then draws an analogy with a royal steward, who carried the keys of the royal palace and governed in the King’s absence, and continues on to explain that one who rules in the place of another is a vicar, that the King of Kings chose Peter to be His vicar, and that after Peter died, another man took his place, and so on through all of Peter’s successors.

As should be expected, Our Holy Father, the Pope expends the majority of its pages in covering Our Lord’s establishment of Peter’s role in the Church followed by a brief account of Peter as the first pope, up to his crucifixion. It then gives a sense of the long history of the papacy simply by highlighting four particular popes, Clement I (who has substantial apologetical value for the initial narrative), Leo the Great, Pius X (because he made communion much more widely available, particularly to children), and John Paul II. The book concludes with a consideration of the pope’s duties, where he lives, who helps him, and how new popes are chosen. The concluding section recommends praying for the Holy Father.

Two pages for adults at the end provide a list of all of the popes from Peter to Francis, and a list of the Scripture passages, Patristic texts and Church documents referenced by the text.

Our Holy Father, the Pope is quite well done. It makes a fine addition to home, school and parish libraries for children.