Seventeenth Sunday of Ordinary Time; World Day for Grandparents and the Elderly 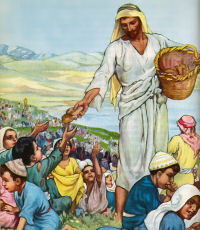 Today is the feast of St. James which is superseded by the Sunday Liturgy.Click here for commentary on the readings in the Extraordinary Form of the Roman Rite.