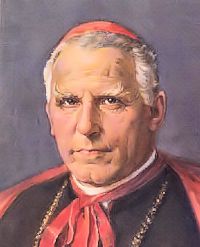 Grant, we pray, O Lord, that, schooled through Lenten observance and nourished by your word, through holy restraint we may be devoted to you with all our heart and be ever united in prayer. Through our Lord Jesus Christ, your Son, who lives and reigns with you in the unity of the Holy Spirit, God, for ever and ever. 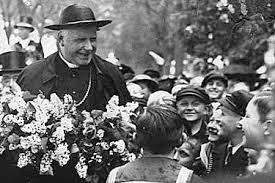 From 1906 to 1929, Fr von Galen carried out much of his pastoral activity outside Münster: in 1906 he was made chaplain of the parish of St Matthias in Berlin-Schönberg; from 1911 to 1919 he was curate of a new parish in Berlin before becoming parish priest of the Basilica of St Matthias in Berlin-Schönberg, where he served for 10 years; here, he was particularly remembered for his special concern for the poor and outcasts.In 1929, Fr von Galen was called back to Münster when Bishop Johannes Poggenpohl asked him to serve as parish priest of the Church of St Lambert."Nec laudibus, nec timore"In January 1933, Bishop Poggenpohl died, leaving the See vacant. After two candidates refused, on September 5, 1933 Fr Clemens was appointed Bishop of Münster by Pope Pius XI. 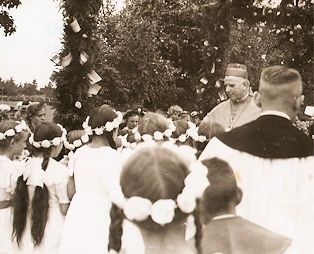 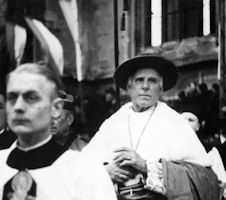 In the summer of 1941, in answer to unwarranted attacks by the National Socialists, Bishop von Galen delivered three admonitory sermons between July and August. He spoke in his old parish Church of St Lambert and in Liebfrauen-Ueberlassen Church, since the diocesan cathedral had been bombed.In his famous speeches, Bishop von Galen spoke out against the State confiscation of Church property and the programmatic euthanasia carried out by the regime.The clarity and incisiveness of his words and the unshakable fidelity of Catholics in the Diocese of Münster embarrassed the Nazi regime, and on 10 October 1943 the Bishop's residence was bombed. Bishop von Galen was forced to take refuge in nearby Borromeo College.From 12 September 1944 on, he could no longer remain in the city of Münster, destroyed by the war; he left for the zone of Sendenhorst.In 1945, Vatican Radio announced that Pope Pius XII was to hold a Consistory and that the Bishop of Münster was also to be present.Creation of a CardinalAfter a long and difficult journey, due to the war and other impediments, Bishop von Galen finally arrived in the "Eternal City." On 21 February 1946 the Public Consistory was held in St Peter's Basilica and Bishop von Galen was created a Cardinal.On 16 March 1946 the 68-year-old Cardinal returned to Münster. He was cordially welcomed back by the city Authorities and awarded honorary citizenship by the burgomaster.On the site of what remained of the cathedral, Cardinal von Galen gave his first (and what would be his last) discourse to the more than 50,000 people who had gathered, thanking them for their fidelity to the then-Bishop of Münster during the National Socialist regime. He explained that as a Bishop, it was his duty to speak clearly and plainly about what was happening.No one knew that the Cardinal was gravely ill, and when he returned to Münster on 19 March 1946 he had to undergo an operation.Cardinal von Galen died just three days later, on 22 March. He was buried on 28 March in the Ludgerus Chapel, which has become a place of pilgrimage to this defender of the faith in the face of political oppression.—©Libreria Editrice VaticanaThings to Do: