Monday of the Ninth Week of Ordinary Time 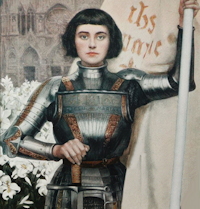 O God, whose providence never fails in its design, keep from us, we humbly beseech you, all that might harm us and grant all that works for our good. Through our Lord Jesus Christ, your Son, who lives and reigns with you in the unity of the Holy Spirit, God, for ever and ever.

Also today is the feast of Pope St. Felix I, who governed the Church from 268 to 273. St. Felix I was buried in the "crypt of the popes," in the catacomb of St. Callixtus, and is often confused with the second century martyr St. Felix, a victim of persecution under the Emperor Marcus Aurelius. Also it is the feast of St. Joan of Arc (some places), Patron saint of France. In her day, the English were allied with the Burgundians in a war against the rest of France. Joan was compelled by voices of her favorite saints to take up arms in defence of her country. Dressed in a suit of white armor, she led the French in battle against the English, who retreated, believing that she was in league with the devil. She continued to battle against the English, with dwindling support, until she was eventually captured and tried as a witch. She was found guilty and at the scaffold she pleaded guilty in exchange for a pardon from the Church. However, since the English had no intention of releasing her from prison, she quickly renounced her confession and resumed wearing men's clothing. For this they publicly burned her at the stake for witchcraft and heresy. The Church reversed its decision in 1455, and she was canonized in 1920.