Monday of the Third Week of Easter (Optional Memorial of St. Beuno in Wales) 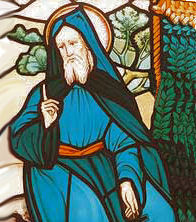 The Church in Wales is celebrating the feast of St. Beuno, one of its greatest saints. He was a wonder-worker and aristocrat, monk and master of monks, patriot, challenger of tyrants — that was the medieval picture of the man which is reflected in his Life, and which survives, carved in stone on the fourteenth century pulpit of the Black Monks of Shrewsbury.

Beuno became the guardian and restorer to life of his niece, the virgin St. Winefride, whose clients still obtain marvelous favors at Holywell (Flintshire). He was relentless with hardened sinners, but full of compassion to those in distress. Before his death "on the seventh day of Easter" he had a wondrous vision. Eleven churches bearing St. Beuno's name, with various relics and local usages, witness to his far-reaching missionary zeal. —Catholic EncyclopediaPatron: Diseased cattle, sick animals, sick children.Symbols: Restoring the head of Saint Winifred.Things to Do: 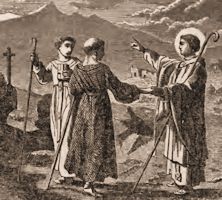 He afterwards settled at Embrun, where he built a chapel in which he passed his nights in prayer, after laboring all the day in the exercise of his sacred calling. By his pious example as well as by his earnest words, he converted many of the heathens among whom he lived.He was afterwards made bishop of the people whom he had won over to Christ, but the date of his consecration is not positively known. Burning with zeal for the glory of God, he sent Vincent and Domninus to preach the faith in those parts which he could not visit in person.He died at Embrun about the year 374, and was there interred. St. Gregory of Tours, who speaks of Marcellinus in terms of highest praise, mentions many miracles as happening at his tomb.—Excerpted from Lives of the Saints, by Alban Butler, Benziger Bros. ed. [1894] Things to Do: 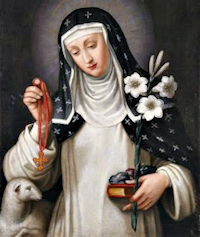 St. Agnes of Montepulciano may be best known for an incident that occurred many years after her death. About seventy years after Agnes died, St. Catherine of Siena made a pilgrimage to the shrine of this revered Dominican foundress. St. Catherine bowed to kiss Agnes’ foot, the saint raised it up toward her. Catherine may not have been totally surprised, as miraculous characteristics had surrounded Agnes’ life.This “little lamb” was born not far from Montepulciano in 1268. She expressed a desire to give her life to God and practiced pious exercises from an early age. Now and then, her parents gave in to her requests to visit the various convents in town. On one such occasion, Agnes and her mother were passing a house of ill repute, when a flock of crows suddenly descended upon her, pecking and scratching the little girl. Her mother remarked that the crows represented demonic forces threatened by her purity. Indeed, years later, Agnes would be asked to found a convent on that very spot.In her teens, Agnes joined the Franciscans in Montepulciano and rose to become its prioress. Small white flakes in the form of crosses fell gently from the heavens in celebration. It is said that the sisters have preserved some of these until today. In 1306, God inspired Agnes to found a Dominican convent with three stones given her by the Blessed Mother in honor of the Trinity. The Blessed Mother had visited Agnes many times. On one of these occasions, she allowed Agnes to hold the Christ Child, but Agnes showed great reluctance in giving him back.Toward the end of her life, Agnes sought healing from some famous springs. Although she did not receive healing herself, her prayers effected the resurrection of a child who had drowned in the springs. In 1317, Agnes died in Montepulciano and received her long-awaited reward.—Excerpted from Dominican Sisters of St. Cecilia CongregationPatron: City of Siena, ItalyThings to Do: