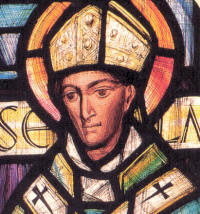 O God, who led the Bishop Saint Anselm to seek out and teach the depths of your wisdom, grant, we pray, that our faith in you may so aid our understanding, that what we believe by your command may give delight to our hearts. Through our Lord Jesus Christ, your Son, who lives and reigns with you in the unity of the Holy Spirit, God, for ever and ever.

St. Anselm
As prior and abbot, Anselm made the Benedictine monastery of Bec the center of a true reformation in Normandy and England. From this monastery he exercised a restraining influence on popes, kings, the worldly great, and entire religious orders. Raised to the dignity of Archbishop of Canterbury and primate of England, he waged a heroic campaign in defense of the rights and liberties of the Church. As a result he was deprived of goods and position and finally banned from the country. He journeyed to Rome, and at the Council of Bari supported Pope Urban II against the errors of the Greeks. His writings bear eloquent testimony to his moral stature and learning, and have earned for him the title of "Father of Scholasticism." 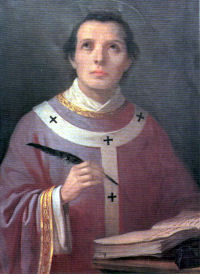 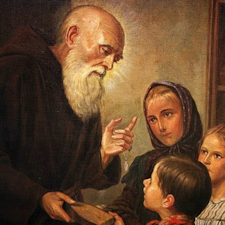 After his profession, he was sent to the Friary of St. Ann in Altotting. The friary served the Shrine of Our Lady of Altotting, the National Shrine of the Blessed Mother in Bavaria. It was here that St. Conrad was given the position of porter at the Shrine, and he retained it until his death. Because of the size of this city, and the many pilgrims, the duty of a friary porter was a difficult one. Conrad was known to be diligent at his work, sparing in words, bountiful to the poor, and eager to help strangers. He served in this position to the town’s people for forty years, fulfilling their needs of body and soul. St. Conrad loved silence in a special way, and his spare moments during the day were spent in a nook near the door, where it was possible for him to see and adore the Blessed Sacrament. He was known for depriving himself of sleep, to spend time with Jesus in the Church or Oratory in prayer. It was the general belief of his fellow friars, that he never slept, but continually occupied himself in his duties and devotion. On April 21, 1894, St. Conrad died in the friary where he had served for 41 years. During his lifetime, Brother Conrad was known to have the gift and ability to read the hearts of those he met and was attributed with the gift of prophecy. His heroic virtues and the miracles he performed won for him canonization by Pope Pius XI in 1934. Practical Take AwaySt. Conrad was born John, in Bavaria, now modern-day Germany. He was the ninth son of a farming family, and after losing his parents he entered the Capuchin Friars. He was sent to the National Shrine of the Blessed Virgin Mary and took the position of Porter. He had the ability to work miracles and was able to read the hearts of those he met, as well as the gift of prophecy. He was believed by his fellow Brothers, to never have slept, rather spent his time with his duties or in devotion at the Chapel. He practiced heroic virtues that won for him the title of saint and was canonized in 1934 by Pope Pius XI. —Excerpted from The Newman ConnectionThings to Do:
Find us on Social Media.