Wednesday of the Third Week of Easter

Be present to your family, O Lord, we pray, and graciously ensure those you have endowed with the grace of faith an eternal share in the Resurrection of your Only Begotten Son. Who lives and reigns with you in the unity of the Holy Spirit, God, for ever and ever.

According to the 1962 Missal of St. John XXIII the Extraordinary Form of the Roman Rite, today is the feast of Sts. Soter and Caius. Soter succeeded Anicetus as Pope in 166, and died a martyr in 175, under the emperor Marcus Aurelius. Caius, whose relics are preserved at the sanctuary of St. Silvester in Rome, governed the Church a century later and died on April 22, 296. The popes of the first centuries suffered the heavy anxiety of the persecutions which continually threatened their flocks; the pontificate of Caius, however, was marked by a long period of peace, some ten years before the terrible persecution under Diocletian. 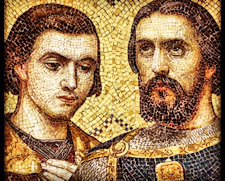