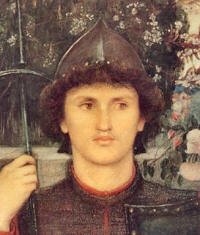 Extolling your might, O Lord, we humbly implore you, that, as Saint George imitated the Passion of the Lord, so he may lend us ready help in our weakness. Through our Lord Jesus Christ, your Son, who lives and reigns with you in the unity of the Holy Spirit, God, for ever and ever.

O God, who bestowed the crown of martyrdom on the Bishop Saint Adalbert, as he burned with zeal for souls, grant, we pray, by his prayers, that the obedience of the block may never fail the shepherds, nor the care of the shepherds be ever lacking to the flock. Through our Lord Jesus Christ, your Son, who lives and reigns with you in the unity of the Holy Spirit, God, for ever and ever.

Veneration of St. George comes to us from the east, probably from Palestine where he was held in high honor as a martyr. Regarded as the patron of Christian armies he is venerated under this title by the Latins as well as by the Greeks.

Saint Adalbert was ordained the Bishop of Prague in 983. During his episcopate he encouraged the evangelization of the Magyars. Having founded the monastery of Brevnov, he was forced into exile by the nobility of Prague. He tirelessly preached the Gospel in Poland, Hungary, Russia, and Prussia, where he was martyred at the age of 41. This optional memorial is recent to the USA liturgical calendar.In England this feast is a solemnity. When the celebration falls in the Easter Triduum, on a Sunday of Easter, or in the Easter Octave it is transferred to the next available day — generally the Monday of the Second Week of Easter. 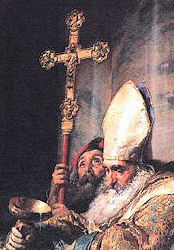 Patron: Bohemia, Czechoslovakia, Poland, Prussia.Symbols: Holding a two-headed cross, two lances, and a club; holding a lance with a club at the lower end; pierced by three lances and beheaded.Things to Do: