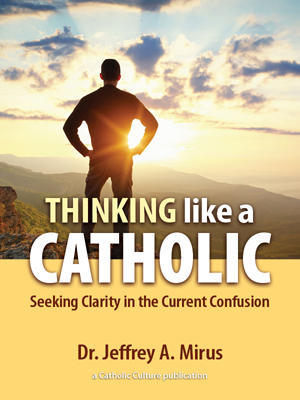 Seeking Clarity in the Current Confusion

Whether writing about the nature of human knowledge or the absurdity of gender ideology, Jeff Mirus makes a point of not just reaching sound conclusions but also demonstrating the key principles which must be deployed to think clearly about the issues which so confuse modern culture. Other topics include relativism, evangelization, mercy, and what it takes to develop a truly vibrant Catholicism. Dr. Mirus shows how Catholics can address these problems, dispelling the intellectual confusion and moral chaos which affects even so many within the Church. This collection of 47 essays, written between 2014 and 2017, does more than showcase the arguments we so obviously need. Taken as a whole, it becomes a superb tutorial in Thinking like a Catholic.