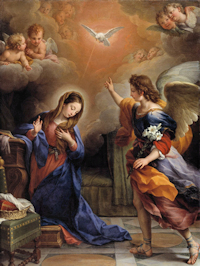 Christ, the Son of God, came into this "far country" in order to become man and, by means of humility, obedience, and poverty, to cast out the usurper who had taken His subjects. He came to reassert His dominion over all those who had left Him, both Jews and Gentiles. The feast of St. Peter Canisius, which is ordinarily celebrated today, is superseded by the Sunday liturgy.O Antiphons ~ Radiant DawnClick here for commentary on the readings in the Extraordinary Form of the Roman Rite.

The Fourth Sunday of Advent
‘The Lord himself will give you this sign: the virgin shall conceive, and bear a son, and shall name him Emmanuel’ (Is 7:14). This well known affirmation by the prophet Isaiah announces the coming of the Messiah into human history. It already gives us a taste of the proximity of that marvelous, stupendous day which will be the ‘dies natalis’ of Jesus. It was foretold by the prophets and proclaimed throughout the whole of Sacred Scriptures that He would be the One who would fulfil and bring them to completion. Our God will be incarnated and born due to the generous willingness of the ‘Virgin’ who, from the very beginning of time, was chosen to be the Mother of the Savior.

On the one hand we see Ahaz’s weak faith as he declined God’s concession to grant him a sign. Whilst on the other hand we see God’s insistence in giving a sign so that His dwelling place amongst men could be fully realized (cf Is 7:10-14). ‘Joseph, son of David, do not be afraid to take Mary as your wife’ (Mt 1:20). Just like in the reading from the prophet Isaiah, yet in a diametrically opposed way to Ahaz’s incredulous attitude, we see Joseph’s full adherence to God’s will. He had just decided to divorce Mary on account of her unexpected pregnancy in accordance with the Law, but upon the Angel’s reassurance ‘he did what he told him to do: he took his wife home’ (Mt 1:24). Joseph’s need for reassurance that the child was the fruit of the Holy Spirit doesn’t diminish his fatherhood but rather enhances it as ‘You must name him Jesus, because He is the One who is to save His people from their sins’ (Mt 1:21). In other words, thanks to his extraordinary fatherhood he, himself accepted and permitted the realization of God’s promise to reside amongst His people. Joseph’s great faith helps us to comprehend that faith assumes a new importance in the most intimate things that belong to us. We are reminded today that everyone of us has received our ‘apostolic mission’ to ‘obtain the obedience of faith’, and to profess our faith in Jesus Christ (cf Rm 1:1-7).In all of these events we see the great mission that Mary undertook as a privileged instrument in the hands of God. It is thanks to her that God found His home amongst men, as she became that first resting place of the Word: ‘Today O Mary you became the book in which our rule is described. In you today is written the wisdom of the Eternal Father…. O Mary, my sweetest love, in you is written the Word, from whom we have life’s doctrine. You are the table on which that doctrine rests. I see this Word that is written in you, who is not without the holy desire of the cross. Immediately that he was delivered to you, the desire of dying for the health of men, for whom he was incarnated, was grafted and placed in Him.’1 Wake up, therefore, because the birth of the Lord is almost at hand, let us go to meet Him in His glory: to listen to him, to love Him and to follow Him!1 St. Catherine of Siena, Prayers and Elevations From the Congregation for the Clergy

6th O Antiphon:
O King of the Gentiles and their desired One,
Cornerstone,
Who makest two into one,

COME
and deliver man,
whom You formed out of the dust of the earth. 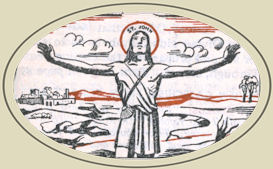