Solemnity of the Most Holy Body and Blood of Christ 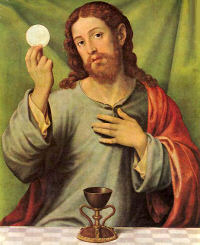 O God, who in this wonderful Sacrament have left us a memorial of your Passion, grant us, we pray, so to revere the sacred mysteries of your Body and Blood that we may always experience in ourselves the fruits of your redemption. Who live and reign with God the Father in the unity of the Holy Spirit, on God, for ever and ever.

While they were eating, he took bread, said the blessing, broke it, gave it to them, and said, "Take it; this is my body." Then he took a cup, gave thanks, and gave it to them, and they all drank from it. He said to them, "This is my blood of the covenant, which will be shed for many."Where the Solemnity of the Body and Blood of Christ is not observed as a holy day, it is assigned to the Sunday after Trinity Sunday, which is then considered its proper day in the calendar.Please see this special section on Corpus Christi.

Cathedrals all across the world will hold an hour of Eucharistic adoration at the same time, inviting the faithful to pray for the Pope's intentions. The worldwide session of adoration will take place from 5 to 6 this afternoon in Rome, and cathedrals worldwide will synchronize their vigils to match that time. The Pope has asked the universal Church to pray for two intentions during the hour of adoration:The worldwide hour of Eucharistic adoration is one of two initiatives for the Year of Faith, announced on May 28 by the Pontifical Council for the New Evangelization.