Catholic Activity: Customs for the Feast of Corpus Christi 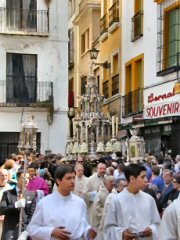 Different customs surrounded this feast dating back to the time of the Middle Ages. These included pageants, processions and wreaths. In America towns and bodies of water were named in honor of the Blessed Sacrament.

PAGEANTS — In most European countries mystery plays used to be performed after the procession in public squares or in churches. The Corpus Christi pageants were highly popular, especially in England, Germany, and Spain. Perhaps the most famous of them are the Autos Sacramentales (Plays of the Sacrament) by the Spanish priest and poet Pedro Calderón de la Barca (1681). They are still performed today on special occasions, such as centenary celebrations, Eucharistic congresses, and ecclesiastical jubilees.

By the seventeenth century, the Corpus Christi processions had developed unusual features which appealed to the mood of baroque piety and were highly favored in all European countries where processions could be held. Saint George and his dragon (in many places Saint Margaret, too), the main characters of the famous mystery pageant of medieval days, now appeared in the procession itself. In Bavaria, impersonations of demons ran along, expressing in vivid pantomime their fright and fear of the Blessed Sacrament. In Belgium and France boys and girls dressed as ancient gods and goddesses, sitting on figures of wild animals, rode in the procession to symbolize the fact that even the pagan past had to rise again and pay tribute to the Eucharistic Lord.

All kinds of symbolic pictures and representations were carried (or walked) in the Corpus Christi processions of western and southern Germany: Moses with the brazen serpent; David and Goliath; the synagogue, symbolized by a withered tree from which hung a broken scepter; the Easter lamb, blood running from its open wound; the figure of Christ wrapped in burial linen and carried by angels dressed in black; the Sorrowful Virgin, followed by thirty mourning women and forty men who walked with outstretched arms, and others.

Especially favored was the attendance of children dressed as angels. Already in 1496, at the great children's procession in Florence, Savonarola had all of them appear in white or garbed as angels. This custom quickly spread all over Europe in the following centuries. At the Corpus Christi procession in Mainz in 1613 hundreds of children, impersonating the nine choirs of angels, marched before the Blessed Sacrament while many other "angels" strewed flowers in front of the Eucharistic Lord.

These manifestations of baroque piety were gradually restricted and most of them suppressed during the second half of the eighteenth century, not without some resistance and much complaining on the part of the population. In some cities even Lutherans protested against the suppression because, not having processions of their own, they had enjoyed watching these features of the Catholic pageant.

In Spain many figures of gigantic size and other figures with immense masks (Gigantes y Cabezudos), representing famous persons of the Old Testament, took part, and still do, in the procession. They perform traditional dances in the street, accompanied by the quaint strains of an ancient melody. In the churches of Spain groups of choirboys danced before the altar in honor of the Blessed Sacrament. The most famous of these Eucharistic dances, still practiced today, is performed on Corpus Christi and some other feast days in the Cathedral of Seville.

DAY OF WREATHS — In central Europe, and also in France, Corpus Christi Day is the "Day of Wreaths" (Kranzeltag) and of huge bouquets of flowers borne on the top of wooden poles (Prangtag). Wreaths and bouquets of exquisite flowers in various colors are attached to flags and banners, to houses, and to the arches of green boughs that span the streets. The clergy and altar boys wear little wreaths on their left arms in the procession; girls carry wreaths on their heads. Even the monstrance containing the Blessed Sacrament is adorned with a wreath of choice flowers on Corpus Christi Day. In Poland these wreaths are blessed by the priest on the eve of the feast day. After the solemnities people decorate their homes with them. Some are suspended on the walls of the houses or affixed to doors and windows. Others are put up in gardens, fields, and pastures, with a prayer for protection and blessing upon the growing harvest.

AMERICAN PLACE NAMES — In the New World the Feast of Corpus Christi was celebrated during the sixteenth and seventeenth centuries, with the usual solemn observance, by the missionaries and their native converts in Florida, California, Texas, New Mexico, and in the missions of New France (Canada and the Great Lakes region). In honor of the festival the Franciscans named a bay of the Gulf of Mexico "Corpus Christi Bay." Later a town, founded on the shore of that bay, was given the same title — Corpus Christi, Texas. In a similar way the capital of California was named Sacramento after the river on which it is situated, which had been named by the missionaries in honor of the Holy Eucharist.