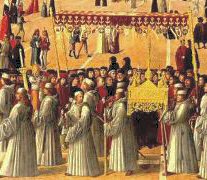 Pope John Paul II declared October 2004 through October 2005 as the "Year of the Eucharist." In his Apostolic Letter Mane nobiscum Domine he urged that Catholics participate in a procession on the Feast of Corpus Christi. Father Weiser explains the the historical richness of this devotion.

Very early (in the fourteenth century) the custom developed of carrying the Blessed Sacrament in a splendid procession through the town after the Mass on Corpus Christi Day. This was encouraged by the popes, some of whom granted special indulgences to all participants. The Council of Trent (1545-1563) solemnly approved and recommended the procession on Corpus Christi as a public profession of the Catholic faith in the real presence of Christ in the Holy Sacrament.

During the later Middle Ages these processions developed into splendid pageants of devotion and honor to the Blessed Sacrament. They are still publicly held, and often with the ancient splendor, in Italy, France, Spain, Portugal, Austria, Belgium, Ireland, in the Catholic sections of Germany, Holland, Switzerland, Canada, Hungary, and in the Slavic countries and South America. Sovereigns and princes, presidents and ministers of the state, magistrates, members of trade and craft guilds, and honor guards of the armed forces accompany the liturgical procession while the church bells peal, bands play sacred hymns, and the faithful kneel in front of their homes to adore the Eucharistic Lord. The houses along the route of the procession are decorated with little birch trees and green boughs. Candles and pictures adorn the windows; and in many places, especially in Latin countries, the streets are covered with carpets of grass and flowers, often wrought in beautiful designs.