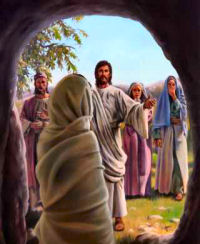 Father, help us to be like Christ your Son, who loved the world and died for our salvation. Inspire us by his love, guide us by his example, who lives and reigns with you and the Holy Spirit, one God, for ever and ever. Amen.

‘Out of the depths I call to you O Lord: Lord hear my cry. Listen attentively to the sound of my pleading!’ (Ps 129:1-2) In this, the fifth Sunday of Lent, the Church invites us to turn our attention to the realities that are perhaps the most ‘scandalous’ in human experience, the death of a loved one. In this Gospel we see all those who are being supportive of Martha and Mary at the moment of their brother, Lazarus’ death.

Previously called "Passion Sunday," this Sunday marks the beginning of Passiontide, a deeper time of Lent. This is the third Sunday of the scrutinies for the preparation of adult converts, and the final Sunday of Lent before the beginning of Holy Week. The Liturgy of the Word of this day speaks of re-creation, resurrection, and new life. Stational Church

The second reading from St Paul to the Romans 8:8-11 states that through Christ the whole person of the believer is saved, raised up, and redeemed. The realm of the flesh is the realm to be left behind, and the realm of the Spirit is where true life is to be found. But there is no hellenistic dichotomy here between flesh and spirit since the believer lives with the Spirit of God enfleshed in his body so that his whole person will live in conformity with that Spirit. The indwelling of the Spirit refers to the baptism of the person and his consequent moral life.The Gospel reading, St. John 11:1-45, opens up in front of us a scene of unprecedented sorrow. The Lord Jesus receives the message from the sisters of Lazarus who, when confronted with the gravity of his condition, tried the only thing possible, they turned to the Lord of who it was said: ‘Everything He does is good, he makes the deaf hear and the dumb speak’ (Mk 7:37). It is the cry of each one of us who would like their loved ones to live forever without ever leaving us. The Lord Jesus, inexplicably, waited a further two days before heading for Lazarus’ home. Even then, He only left with His disciples when he divinely knew of His friend’s death. This particular detail from the Gospel tells us that the Word of God was made Man for the love of all of us. Also that His look of love is always upon us waiting for that meeting of immense joy that will happen in eternity.Upon Jesus’ arrival in Bethany there was a new apparently inexplicable development in the story. First Mary, then her sister Marta and behind them all the Jews who were united with them, converge on Jesus with the certainty that if there was a response to their sorrow it would come from Him. They were not irreligious people who were looking to Jesus for a solution. They profoundly accepted Israel’s faith in the final Resurrection and so even this event was not ultimately inexplicable. In fact Martha said to the Lord, ‘I know that he will rise again at the resurrection on the last day’. (Jn 11:24) However, knowing that in relation to the Lord, nothing that was authentically human in them or their cry of sorrow be would be lost. Prior to that, their only consolation came from the eschatological faith of the time. In this last sign, worked by the Lord before His triumphant entrance into Jerusalem, everything seams to flow to that ‘new reality’ inaugurated by Emmanuel, God with us. Sharing our existence, Jesus had loved us with a supreme passion, with that virginal love that doesn’t seek to possess the heart of the other, but to love it in truth with delicate insistence right up to sacrificing Himself for us. In this infinite delicacy and attention to everyone, He was able to be moved by those who were linked to Him by ties of the most profound friendship who understood that it could not be anything but God’s presence amongst them. ‘I am the resurrection and the life; whoever believes in me, even if he dies, will live, and everyone who lives and believes in me will never die. Do you believe this? She said to him, Yes, Lord. I have come to believe that you are the Messiah, the Son of God, the one who is coming into the world. (Jn 11:25-27)Christ then performed the great miracle of Lazarus’ resurrection. He announced, through the work of the Father, that He, Himself, God made man, is the Resurrection and the Life. He is also the Lord of biological life. His voice can reach those who, like Lazarus, have exceeded the threshold of four days from their death and arrived at the point where bodily corruption commences. Faced with this sign, the words with which He foretold His Resurrection become clearer: ‘I lay down my life, that I may take it again.’(Jn 10:17) He really can ‘take up [His life] again’ as He is the Word of Life. If Lazarus’ resurrection didn’t stop the Lord’s beloved friend from embracing ‘our sister death’ – to use St Francis’ expression - when God finally called him again from this life, then how much greater is the Life that the Lord has earned for Lazarus and everyone of us in the Pascal Mystery that we are preparing to celebrate a few days from now.It was Martha and Mary’s faith, even when confronted with Lazarus’ death that gave rise to the extraordinary miracle worked by Christ. This is not only a consoling story narrated in the letters of the Gospel, but it is also accessible to us today in the Church from the day of our Baptism until when we are incorporated to Him by means of the Spirit that He has given to us. ‘If the Spirit of him who raised Jesus from the dead dwells in you, he who raised Christ Jesus from the dead will give life to your mortal bodies also through his Spirit who dwells in you.’ (Rom 8:11)Most Holy Mary, the mother of the Risen One, give us the grace to look towards and live the light of this extraordinary reality – the promise of Resurrection in Christ. Amen.From the Congregation for the Clergy