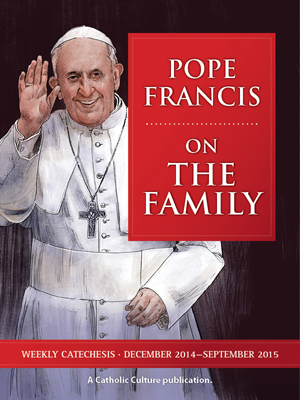 Pope Francis on the Family

From December 2014 through September 2015, Pope Francis offered an extended catechesis on the family in 28 sessions. Topics include the Holy Family, mothers, fathers, children, siblings, grandparents and the elderly, male and female, the dignity of marriage, goodness in the family, education, engagement, unemployment and poverty, illness, death, woundedness, celebrating the family, work, prayer, transmission of the faith, the family and the Christian community, and the family as the bond of nations. An appendix adds two more catecheses given while the 2015 Synod was in session, and three more in the month following the Synod, bringing the total to 33.