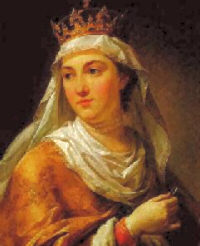 Lord, pour out on us the riches of the Spirit which you bestowed on Saint Margaret Mary. May we come to know the love of Christ, which surpasses all human understanding, and be filled with the fullness of God. Grant this through our Lord Jesus Christ, your Son, who lives and reigns with you and the Holy Spirit, God, for ever and ever. Amen.

Hedwig (1174-1243), the aunt of St. Elizabeth of Hungary, was married at an early age to Henry, Duke of Silesia. After their six children had been born, they both strove to advance in sanctity and to enrich Silesia and Poland with monasteries, hospitals, and leper asylums. When Henry died in 1238, Hedwig took the habit of the Cistercian nuns at Trebnitz (where one of her daughters was the abbess), but retained the administration of her property so that she could give personal relief to the suffering.

After a girlhood marked by painful illness and even more painful family discord, Margaret Mary Alacoque (1647-1690) entered the Visitation convent of Paray-le-Monial, France, at the age of 22. She was ignorant, sickly, and clumsy, but she had great charity and humility. Our Lord chose her to spread devotion to his Sacred Heart, at a time when rebellion without (Protestantism) and heresy within (Jansenism) were doing their best to separate Catholics from their faith and their God.Before the reform of the General Roman Calendar the feast of St. Margaret Mary was celebrated on October 17. St. Gerard Majella, listed in the Roman Martyrology, was a native of Muro in southern Italy. He was apprenticed to a tailor before asking to be received by the Redemptorists as a lay-brother. He continued his trade in the monastery, where he soon attracted the attention of St. Alphonsus de Liguori, who shortened his novitiate. His wonderful and well authenticated life was a series of supernatural phenomena — bilocations, reading of consciences, prophecies, multiplying of food, etc. He was canonized in 1904 and is the patron of expectant mothers and unborn children. Today we also celebrate the 30th anniversary of John Paul II being elected pope in 1978. 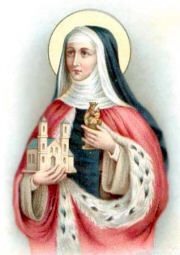 Hedwig was born in 1174 in Bavaria, the daughter of the Duke of Croatia. She was the maternal aunt of St. Elizabeth of Hungary. She married Duke Henry of Silesia and raised seven children, with the boys being quite a handful. She outlived all but one of her children, Gertrude. Hedwig persuaded her husband to use her dowry to found a Cisterian monastery for nuns at Trebnitz. Their daughter Gertrude later became abbess of the monastery.

Hedwig led a life of piety and solicitude for the sick and poor, including their religious education. She lived a life of poverty and humility, despite her prominent position. Every day, even in winter, she would walk barefooted, so her feet were in bad shape. A story tells us her husband sent her a pair of shoes, insisting that she not be without them — so she kept them under her arm. After the death of her husband Hedwig completely renounced the world and entered the monastery of Trebnitz which she had founded. She died on October 15, 1243 and is venerated as patroness of Poland. She is not to be confused with St. Hedwig, Queen of Poland (1371-1399), canonized by John Paul II. (Her feast day is February 28.)Patron: Bavaria; brides; duchesses; death of children; marital problems; Silesia; victims of jealousy; widows.Symbols: noble lady holding statue of Virgin and Child; noble lady holding a church (symbol of monastery); lady holding pair of shoes under arm.Things to Do:
Find us on Social Media.