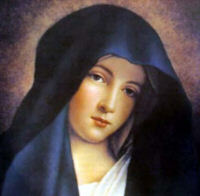 Father, as your Son was raised on the cross, his mother Mary stood by him, sharing his sufferings. May your Church be united with Christ in his suffering and death and so come to share in his rising to new life, where he lives and reigns with you and the Holy Spirit, God, for ever and ever. Amen.

Before the reform of the General Roman Calendar today was also the commemoration of St. Nicomedes, a Roman martyr of unknown date. He was buried not far from the walls of Rome on the Via Nomentana, and the pious faithful built a "cemetery basilica" above his tomb.

Excerpted from Butler's Lives of the SaintsPatron: Brides, Childless People, Difficult Marriages, People Ridiculed for their Piety, Temptations, Victims of Adultery, Victims of Unfaithfulness, Widows.Things to Do: