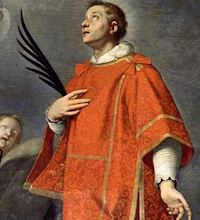 Third Week in Ordinary Time: Almighty ever-living God, direct our actions according to your good pleasure, that in the name of your beloved Son we may abound in good works. Through our Lord Jesus Christ, your Son, who lives and reigns with you in the unity of the Holy Spirit, God, for ever and ever.

Day of Prayer for Unborn Children: God our Creator, we give thanks to you, who alone have the power to impart the breath of life as you form each of us in our mother's womb; grant, we pray, that we, whom you have made stewards of creation, may remain faithful to this sacred trust and constant in safeguarding the dignity of every human life. Through our Lord Jesus Christ, your Son, who lives and reigns with you in the unity of the Holy Spirit, God, for ever and ever.

Optional Memorial of St. Vincent: Almighty ever-living God, mercifully pour out your Spirit upon us, so that our hearts may possess the strong love by which the Martyr Saint Vincent triumphed over all bodily torments. Through our Lord Jesus Christ, your Son, who lives and reigns with you in the unity of the Holy Spirit, God, for ever and ever.

Optional Memorial of St. Marianne Cope: O God, who called us to serve your Son in the least of our brothers and sisters, grant, we pray, that by the example and intercession of the Virgin Saint Marianne Cope, we may burn with love for you and for those who suffer. Through our Lord Jesus Christ, your Son, who lives and reigns with you in the unity of the Holy Spirit, God, for ever and ever.

Propers for the Preservation of Peace and Justice, Entrance Antiphon, Cf. Sir 36:18, 19:

Give peace, O Lord, to those who wait for you; hear the prayers of your servants and guide us in the way of justice.

Our Savior Jesus Christ has destroyed death and brought life to light through the Gospel.

Blessed are the peacemakers, for they shall shall be called children of God.

Propers for the Optional Memorial of St. Vincent, Entrance Antiphon:

This holy man fought to the death for the law of his God and did not fear the words of the godless, for he was built on solid rock.

Whoever loses his life for my sake, will find it in eternity, says the Lord.

Here is a wise virgin, from among the number of the prudent, who went forth with lighted lamp to meet Christ.

Behold, the Bridegroom is coming; come out to meet Christ the Lord.

In addition to this special Mass on this day, perhaps your parish, school or religious formation program could encourage traditional forms of penance, host pro-life and chastity speakers, lead informative projects that will directly build up the culture of life, show a pro-life film, raise funds for local crisis pregnancy centers or offer additional prayer services.

In the United States the Optional Memorial of St. Vincent of Saragossa (d. 304), is transferred from January 22 in the Universal Calendar to January 23. He was one of the greatest deacons of the Church. He was born in Huesca, Spain, suffered martyrdom in Valencia in the persecution under Diocletian.

The proper calendar of the United States also celebrates the Optional Memorial of St. Marianne Cope (1838-1918). She was born on January 23, 1838, in Darmstadt, Germany. In 1862, she entered the Sisters of Saint Francis in Syracuse, New York, after having postponed her entrance nine years in order to fulfill family obligations. She was instrumental in the founding of several schools and hospitals for immigrants. In 1883, she led a group of sisters to the Hawaiian Islands to care for the poor, especially those suffering from leprosy. In 1888 she went to Kalaupapa, Moloka‘i, where she set up a home for girls with leprosy. After the death of Saint Damien de Veuster, she also took over the home he built for boys. She died on August 9, 1918.

The Roman Martyrology also commemorates St. Emerentiana (d. 304) whose veneration is connected with that of St. Agnes. She was venerated at Rome not far from the Basilica of St. Agnes-Outside-the-Walls on the via Nomentana. The acts of St. Agnes make Emerentiana her foster sister; according to this source, while still a catechumen she was stoned at the tomb of the youthful martyr where she had gone to pray.

Vincent of Saragossa was one of the Church's three most illustrious deacons, the other two being Stephen and Lawrence. He is also Spain's most renowned martyr. Ordained deacon by Bishop Valerius of Saragossa, he was taken in chains to Valencia during the Diocletian persecution and put to death. From legend we have the following details of his martyrdom. After brutal scourging in the presence of many witnesses, he was stretched on the rack; but neither torture nor blandishments nor threats could undermine the strength and courage of his faith. Next, he was cast on a heated grating, lacerated with iron hooks, and seared with hot metal plates. Then he was returned to prison, where the floor was heavily strewn with pieces of broken glass. A heavenly brightness flooded the entire dungeon, filling all who saw it with greatest awe.

After this he was placed on a soft bed in the hope that lenient treatment would induce apostasy, since torture had proven ineffective. But strengthened by faith in Christ Jesus and the hope of everlasting life, Vincent maintained an invincible spirit and overcame all efforts, whether by fire, sword, rack, or torture to induce defection. He persevered to the end and gained the heavenly crown of martyrdom.

St. Marianne Cope was born in western Germany in 1838 as Barbara Koob. She entered religious life in Syracuse, New York in 1862. She served as a teacher and principal in several schools in the state and established two of the first hospitals in the central New York area: St. Elizabeth Hospital in Utica and St. Joseph’s Hospital in Syracuse.

In 1883, Mother Marianne’s community was the only one of fifty to respond positively to an emissary from Hawaii who requested Catholic sisters to provide health care on the Hawaiian Islands, especially to those with leprosy.

Over the next five years, St. Marianne set up a system of long-term education and care for her patients.

She ministered to patients at Kalaupapa on the island of Molokai. Her time of service overlapped with the last years of St. Damien of Molokai, a priest who served victims of Hansen’s disease and himself died of leprosy.

St. Marianne promised her sisters that none of them would ever contract the disease. To this day, no sister has. Her care earned her the affectionate title “beloved mother of the outcasts.”

"At a time when little could be done for those suffering from this terrible disease, Marianne Cope showed the highest love, courage and enthusiasm," Pope Benedict XVI said in his homily during the Mass for her canonization. "She is a shining and energetic example of the best of the tradition of Catholic nursing sisters and of the spirit of her beloved Saint Francis."

St. Emerentiana was a Roman virgin, the foster sister of St. Agnes who died at Rome in the third century. Already as a catechumen she was conspicuous for her faith and love of Christ. One day she boldly upbraided the idolaters for their violent attacks on the Christians. The enraged mob retaliated by pelting her with stones. She died in the Lord praying at the tomb of St. Agnes, baptized in her own blood.

A church was built over her grave which, according to the Itineraries, was near the church erected over the place of burial of St. Agnes, and somewhat farther from the city wall. In reality Emerentiana was interred in the coemeterium majus located in this vicinity not far from the coemeterium Agnetis.

Patronage: against abdominal pains; against colic; against stomach ache; against digestive disorders

Symbols and Representation: girl with stones in her lap and holding a palm of martyrdom or lily of a holy death; young girl being stoned by a mob near the tomb of Saint Agnes of Rome