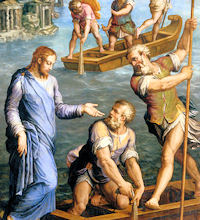 Third Sunday in Ordinary Time: Almighty ever-living God, direct our actions according to your good pleasure, that in the name of your beloved Son we may abound in good works. Through our Lord Jesus Christ, your Son, who lives and reigns with you in the unity of the Holy Spirit, God, for ever and ever.

O sing a new song to the Lord; sing to the Lord, all the earth. In his presence are majesty and splendor, strength and honor in his holy place!

Alleluia Verse for the Third Sunday in Ordinary Time, Year A, Cf. Mt 4:23:

Jesus proclaimed the Gospel of the Kingdom and cured every disease among the people.

Look toward the Lord and be radiant; let your faces not be abashed.

Sunday Readings, Cycle A:
The First Reading is taken from the Book of the Prophet Isaiah 9:1-4. This reading is another prophecy, concerning the messianic days, given by Isaiah in the eighth century B.C. It describes the new era of liberty and joy, which the future Messiah will usher in.

The Second Reading is from the First Letter of Saint Paul to the Corinthians 1:10-13, 17. St. Paul corrects the Corinthians for the pride that was causing them to form factions and divisions.

The Gospel is from St. Matthew 4:12-23. The prophet Isaiah announced a future of liberation and great joy for all of Galilee, through the image of light that dispels the darkness in which the people walk. The Gospel, quoting verbatim the same passage of the prophet Isaiah, presents Jesus as the Light thus fulfilling Isaiah’s prophecy. He is the light that was promised to dispel the darkness of sin and to free man from the obscurity in which he is enclosed.

The light becomes an efficacious means to express God’s involvement in human history. God manifests Himself as ‘The Light’ that disperses the darkness. The light illuminates, encircles, defines things, emphasises the colours and gives depth to space. The light heartens and comforts: to be in an enlightened place helps us to accept reality for what it is and makes one feel happier, more certain and protected.

God’s initiative with regard to men permits them to have a renewed relationship with reality. In God’s light everything assumes a new significance, its authentic and definitive meaning. A light which illuminates gives strength and permits the disclosure of the universe and man. This is why, after saying, ‘on those who dwelt in the land of gloom a light has shone’ (Is 9:1), the text adds, ‘you have brought them abundant joy and great rejoicing’ (Is 9:2).

A joy and happiness that became real in Jesus’ presence. He is the promised light that has come into our midst, His physical presence that expresses the definitive arrival of the Light. The light that shines brightly marks God’s initiative performing His first merciful and free step towards a wounded humanity.

This dynamic is expressed through Jesus call of the first Apostles. He chooses them with an unequivocal call, ‘Follow Me’. Faced with God’s sudden interruption in their lives He invited them to abandon the nets and trust themselves totally to the Lord for a new ‘catch’, a new definitive horizon. At the Last Supper, the end of His earthly life, Jesus reminds His disciples ‘you did not choose me, no, I chose you’ (Jn 15:16).

This Sunday’s Gospel invites us to remember that our personal vocation is founded on God’s original and absolutely free choice. His invitation towards us, therefore, is an invitation to make a final decision to let Him conquer or re-conquer us to mark a turning point in our lives.

Let us ask the Lord, for us and the whole Church, for the gift of a true conversion of our hearts enabling us to receive Christ as the only Light to follow. Christ is the only one that really dispels the darkness within and around us.

—From the Dicastery for the Clergy