Carnival Part One: A Season of Contrasts

Lent is a month away. The Second Sunday in Ordinary Time is exactly 31 days before Ash Wednesday. The Church has entered Tempus ad Annum, “The Season Throughout the Year,” most commonly referred to as “Ordinary Time“ and will soon enter the six-week period of Lent culminating in the heart of the Liturgy and the Liturgical Year: Easter, the Paschal Feast. 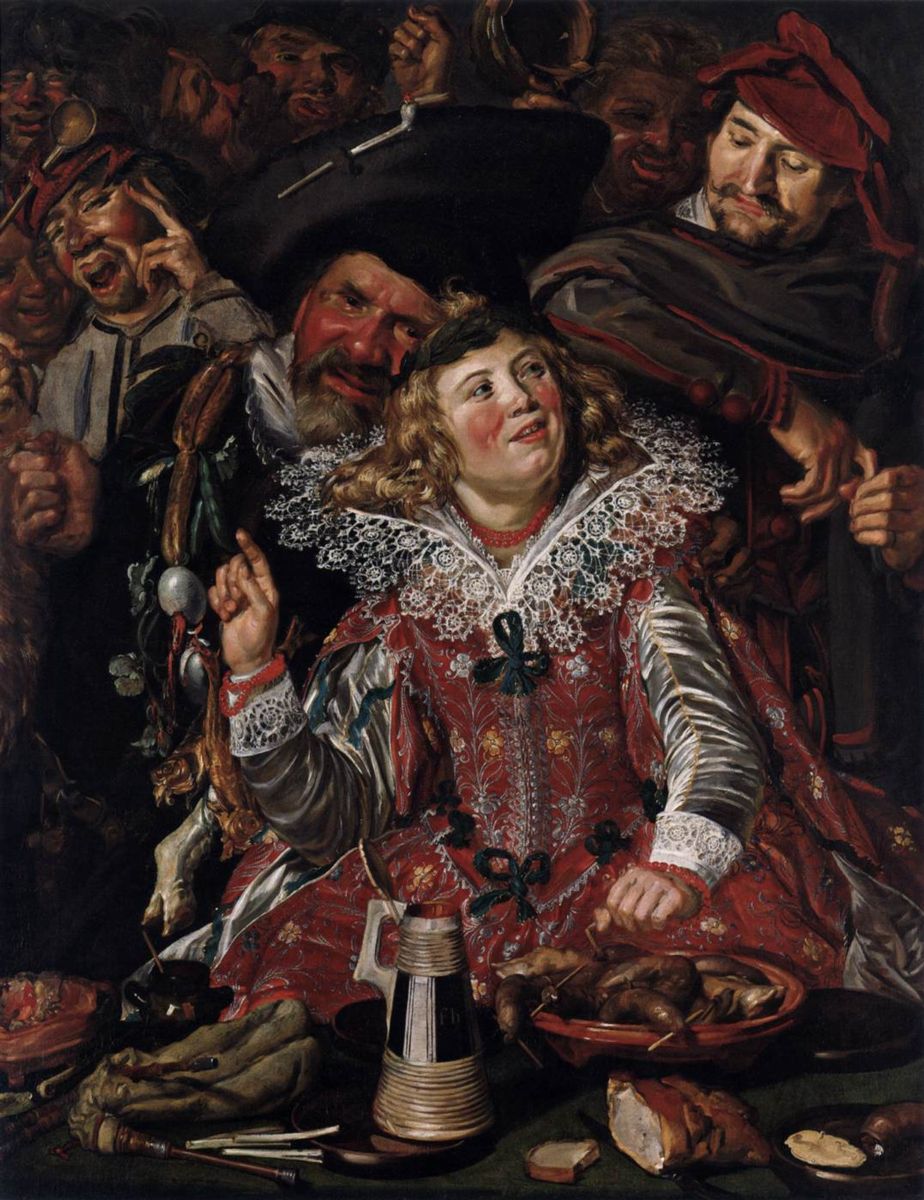 Although not a liturgical season of the Church, the weeks after Christmas are unofficially known as “Carnival,” a season of balls, parades, parties and rich food. There is no set beginning as Carnival begins on various dates all over the world. Rio de Janeiro and Venice begin two and a half weeks before Ash Wednesday. Most Americans are familiar with the South Louisiana Mardi Gras which begins on Epiphany.

Regardless of when Carnival begins or how it is celebrated, the celebration intensifies the closer it gets to the beginning of Lent and comes to screeching halt on Ash Wednesday.

The word “carnival“ literally means “farewell to meat.” In earlier times in the Church, Lenten fasting and abstinence had more stringent rules. Foods such as meat, butter, cheese, milk, eggs, fat, and bacon were all forbidden in Lent, so Carnival was a time to indulge and use up (and not waste) these foods. While Lent doesn’t have the formerly strict regulations, the word carnival in a broad sense is also saying farewell to fleshly or worldly pleasures (even if they are mere indulgences and not sinful) before our Lenten penances and mortifications.

For centuries, all over the world, this has been known as a time for preparing for Lent. “Preparing for Lent” is an odd way to describe what goes on during Carnival, but it does have religious connections. Perhaps some have forgotten the original intention, but Carnival is a time of mental and physical preparation for the Lenten time of self-denial. This is a time for family, food and fun before we face Ash Wednesday and fill our days with prayer, fasting and almsgiving.

Although it seems like such a secular and materialistic celebration, without the spiritual grounding there can be no Carnival. As Josef Pieper explains:

Wherever festivity can freely vent itself in all its possible forms, an event is produced that leaves no zone of life, worldly or spiritual, untouched.... There are worldly, but there are no purely profane, festivals. And we may presume that not only can we not find them, but that they cannot exist. A festival without gods is a non-concept, is inconceivable. For example, Carnival remains festive only where Ash Wednesday still exists. To eliminate Ash Wednesday is to eliminate the Carnival itself. Yet Ash Wednesday is obviously a day in Christendom’s liturgical year (Josef Pieper, In Tune with the World: A Theory of Festivity, 1963, pp 33-34).

And Bernard Strasser elaborates on this spiritual connection:

These carnival days in particular contain a remarkable lesson of spirituality for us. According to their origin and the Church’s intention they are anything but days of thoughtless conviviality, and certainly not of dissolute merrymaking. They are not a carryover from pagan times, of which the Church was unable to destroy the memory and observance. Rather are they an integral part of the Church year, with the significant task of illustrating graphically the first part of the Church’s sermon text for this season: “You are fools, all of you who seek your final end in earthly things! I your Mother will during the coming weeks of Lent show you where true happiness may be found, Who it is that brought it, and how He merited it for us” (Carnival and Ashes, Orate Fratres: A Liturgical Review, Vol. XVII, No. 4, 146).

Of course, over the centuries there have been abuses of extremes, and the Church has counterbalanced by providing spiritual balance, such as encouragement for Shriving (confessions), Eucharist Adoration, especially the Forty Hours devotion before Ash Wednesday.

There is a juxtaposition of Carnival and Lent. As Pieper mentioned that Carnival festivity “leaves no zone of life, worldly or spiritual, untouched,” similar to our observance of Lent. The Church gives us this time to reexamine and reorder all aspects of our life. We can see the contrast of Carnival indulgence and Lenten fasting not just in foods, but all areas of life.

Maria von Trapp in Around the Year with the Trapp Family recognized Carnival as a time for family celebration. She suggested using this time of “merry-making” for dancing, singing, games, parties and gatherings with family and friends. Perhaps some of her suggestions seem subdued and old-fashioned for a very electronically-connected generation, but her emphasis was to enjoy the togetherness. Our attention is focused outward nurturing family connections and friendships, with opportunities in practicing dancing and music. The opposite is true in the season of Lent: it is a season to reduce social activities, to turn off the extra noise and visuals (electronics) and to turn inward to talk to and listen to God.

In the modern world our lives are not as connected to the days and the seasons of nature except as inconvenience or enjoyment. Many of us are also disconnected to the rhythm of the Liturgical Year, with its contrasting seasons and feasts. Maria von Trapp explained this so beautifully:

Nobody could stand a Thanksgiving Day dinner every day of the year. There can only be mountains if there are also valleys. It is a pity that the Reformation did away not only with most of the sacraments and all of the sacramentals, but also, unfortunately, with the very breath of the Mystical Body—that wonderful, eternal rhythm of high and low tide that makes up the year of the Church: times of waiting alternate with times of fulfillment, the lean weeks of Lent with the feasts of Easter and Pentecost, times of mourning with seasons of rejoicing. Modern man lost track of this. Deep down in the human heart, however, is imbedded the craving to celebrate, and, in a dumb way, the other craving to abstain, perhaps to atone. In general, these cravings are no longer directed in seasonal channels, as they are for the Catholic, or even for the aborigine who participates in some tribal religious belief.....

It should be our noble right and duty to bring up our children in such a way that they become conscious of high tide and low tide, that they learn that there is “a time to weep, and a time to laugh, a time to mourn, and a time to dance.” The rhythm of nature as it manifests itself in the four seasons, in day and night, in the individual’s heartbeat and breathing—this rhythm we should learn to recognize, and to treat with more reverence. Modern man has become used to turning day into night and night into day according to his whim or pleasure. He has managed to lose contact completely with himself. He has lost the instinct for the right food and drink, stuffing himself with huge quantities of the wrong things and feeding himself sick. But worst of all, and this sounds almost ridiculous, in the process of growing up he forgot the right kind of breathing....

Again, it is our faithful friend, Holy Mother Church, who leads her children first back to nature in order to make them ready to receive supernatural grace. “Gratia supponit naturam.“

Looked upon in this light, the weeks of Carnival are a most necessary time for the individual as well as for families and communities. This period is set aside for us to “let off steam,” “to have a good time.” And for this we need company. Therefore, Carnival is most obviously the season for parties and family get-togethers...with the avowed intention of having that good time together. Carnival is the time to be social, to give and to receive invitations for special parties. It is the time to celebrate as a parish group... (Maria von Trapp, Around the Year with the Trapp Family, Carnival or Mardi Gras).

Mrs. Trapp shared different activities that her family enjoyed, such as folk dancing, singing folk songs, and playing games. Growing up my family enjoyed similar ideas, even though we weren’t as musical as the Trapp Family. We loved to learn songs in rounds or harmony to sing together. Other ideas: taking hikes that end singing around a campfire, and Bunco parties, which any age can enjoy. Our local homeschool group just had a sock-hop open to all ages, and checkers and chess tournaments on cold winter days. Some gatherings can can quiet, like family movie nights with popcorn. And don’t forget just nurturing mothers with little social gatherings, maybe with themes like a little craft or recipe exchange or just coffee or wine and adult conversation. I have hosted socials where my friends and family come to learn and practice writing pysanky (Ukrainian Easter eggs). Later in Lent we have quiet times where we work on our eggs as meditative work, but during Carnival time it’s more of a fun social gathering. The object is to enjoy this time with others.

Carnival is a season with a spiritual focus that encompasses the entire person. It provides contrasts with the spiritual and material, with feasting and fasting, and with Ordinary Time and Lent. We can embrace this time and find ways for merry-making, focusing on family and friends to highlight those contrasts in preparation for Lent. Happy Carnival Time!