December 19: O God, who through the child-bearing of the holy Virgin graciously revealed the radiance of your glory to the world, grant, we pray, that we may venerate with integrity of faith the mystery of so wondrous an Incarnation and always celebrate it with due reverence. Through our Lord Jesus Christ, your Son, who lives and reigns with you in the unity of the Holy Spirit, God, for ever and ever.

He who is to come will come and will not delay, and now there will be no fear within our land, for he is our Savior.

O Root of Jesse’s stem, sign of God’s love for all his people: come to save us without delay!

The Dawn from on high will visit us, guiding our feet in the way of peace.

Today is the Third of the O Antiphons, O Radix Jesse (O Root of Jesse). Christ the King, the Lord! Divine Wisdom, Adonai, the powerful God, is at the same time man with flesh and blood of the house of Jesse, the father of King David. Truly, the right of kingship has now passed from the house of David. The glory that once clothed the royal family has faded and withered, leaving only a blighted and withered root. But from this root is to spring a glorious blossom, the King of the world. "He shall rule from sea to sea and from the river unto the ends of the earth. Before Him the Ethiopians shall fall down and His enemies shall lick the ground. The kings of Tharsis and the islands shall offer presents: the kings of the Arabians and of Saba shall serve Him" (Ps. 71:8-11). To Him God has said, "Thou art My Son. . . . I will give Thee the Gentiles for Thy inheritance, and the utmost parts of the earth for Thy possession" (Ps. 2:7 ff).

"Come to deliver us and tarry not." The world cries out for Christ its King, who shall cast out the prince of this world (John 12:31). The prince of this world established his power over men as a result of original sin. Even after we had been delivered from the servitude of Satan through the death of Christ on the cross, the prince of this world attempts to exercise his power over us. "The devil, as a roaring lion, goeth about seeking whom he may devour" (I Pet. 5:8). In these trying times, when faith in Christ and in God has largely disappeared, when the propaganda of a pagan culture is broadcast everywhere, and the forces of evil and falsehood rise up to cast God from His throne, who does not feel the power of the devil? Does it not appear that we are approaching that time when Satan will be released from the depths of hell to work his wonders and mislead, if possible, even the elect? (Apoc. 20:2; Matt. 24:24.)

"Come, tarry not." Observe how thoroughly the world of today has submitted to the reign of Satan. Mankind has abandoned the search for what is good and holy. Loyalty, justice, freedom, love, and mutual trust are no longer highly regarded. Establish, O God, Thy kingdom among us, a kingdom established upon truth, justice, and peace. "Come, tarry not." "Thy kingdom come." 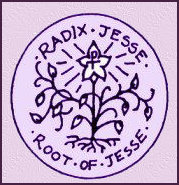 Come to deliver us, and tarry not.

Traditional Antiphon: O Root of Jesse, who stands for an ensign of the people, before whom kings shall keep silence and unto whom the Gentiles shall make supplication: Come to deliver us, and tarry not.

Vespers Antiphon: O Flower of Jesse's stem, you have been raised up as a sign for all peoples; kings stand silent in your presence; the nations bow down in worship before. Come, let nothing keep you from coming to our aid.