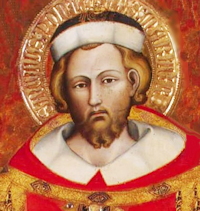 Nineteenth Week in Ordinary Time: Almighty ever-living God, whom, taught by the Holy Spirit, we dare to call our Father, bring, we pray, to perfection in our hearts the spirit of adoption as your sons and daughters, that we may merit to enter into the inheritance which you have promised. Through our Lord Jesus Christ, your Son, who lives and reigns with you in the unity of the Holy Spirit, God, for ever and ever.

Optional Memorial of Sts. Pontian & Hippolytus: May the precious long-suffering of the just, O Lord, we pray, bring us a great increase of love for you and always prompt in our hearts constancy in the holy faith. Through our Lord Jesus Christ, your Son, who lives and reigns with you in the unity of the Holy Spirit, God, for ever and ever.

Blessed are you, Father, Lord of heaven and earth; you have revealed to the little ones the mysteries of the Kingdom.

The following saints are included in the Roman Martyrology today:
—St. Cassian of Immola (d. 304), a martyr of the neighborhood of Bologna. According to his biography, he was a schoolmaster and was delivered with his hands tied behind his back to his young pupils, who stabbed him to death. In the bishop's chapel at Ravenna there is a mosaic of St. Cassian that dates from the fifth century.—St. Radegunde (518-587) is also commemorated today. She was queen at Poitiers and her life was renowned for miracles and virtues.—St. John Berchmans (1599-1621) was born and grew up in a Flemish-speaking area of present-day Belgium. He joined the Society of Jesus (Jesuits). He was very studies and his life was marked by extraordinary piety and love of God above all things. But while at college he was seized with a violent fever, from which he died on August 13th, at the age of twenty-two years and five months. He is the patron of altar servers.—Blessed Michael Joseph McGivney (1852-1890), American priest who founded the Knights of Columbus. 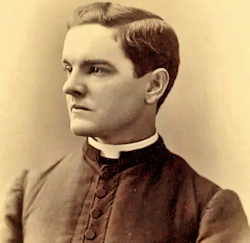 Assigned to St. Mary’s Parish in New Haven, Fr. McGivney was very active in parish and civic affairs, serving as director of public plays and fairs. He volunteered to become the guardian of Alfred Downes, a minor whose father had died leaving a large family in poverty. This situation as well as his own family's circumstances and that of other immigrants impressed on Fr. McGivney the need for lay Catholic men to establish a mutual aid society to provide financial assistance for their families if the primary wage earner died. Protestant fraternal groups already provided this type of life insurance protection for their members.In 1882, Fr. McGivney formed the Knights of Columbus among a small group of St. Mary's parishioners to promote charity, unity, and fraternity, assisting widows and orphans. Because of the Knights' emphasis on serving Church, community and family, the organization grew and did not remain strictly parish-based. Patriotism was added as a founding principle in 1900.Father McGivney died from pneumonia in 1890 and was buried in Thomaston, Connecticut. Later his body was moved back to St. Mary’s in New Haven where it remains today. He was beatified in 2020.—Excerpted from Franciscan MediaThings to Do:
Find us on Social Media.