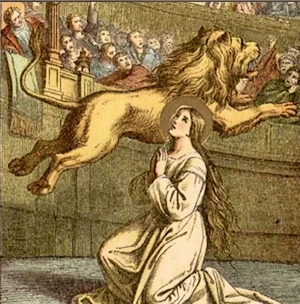 She was a noble Roman virgin, who glorified God, suffering many torments and a cruel death for her faith, in the capital city of the world, in the third century. There stood a chapel consecrated to her memory in Rome, which was frequented with great devotion in the time of St. Gregory the Great. Her relics were discovered in a vault, in the ruins of her old church and translated with great pomp in the year 1634, under the Pope Urban VIII, who built a new church in her honor, and composed himself the hymns used in her office in the Roman Breviary. The city of Rome ranks her among its particular patrons. The history of the discovery of her relics was published by Honoratus of Viterbo, an Oratorian.

—Taken from Vol. I of The Lives or the Fathers, Martyrs and Other Principal Saints by the Rev. Alban Butler, the 1864 edition published by D. & J. Sadlier, & Company

A very ancient church, situated in the Roman Forum at the foot of the Capitoline Hill, and constructed on the ruins of the Palace of the Senate, bears the name of this Saint. Relics discovered under Urban VIII (1623-1644) revived the memory of this Martyr, forgotten for centuries.

Acts of a more than doubtful authenticity, and which Fr. Thurston, S.J., styles "extravagant," relate the different torments which she underwent, and which did not deprive her of life. Urban VIII, who composed the hymns of her Office, tells us: "Even the lion, O Martina, forgetting his cruelty, lays himself at thy feet; but the sword which slays thee introduces thee into the celestial assembly."

Another strophe of this hymn deserves to be cited: it is that in which the Pope makes allusion to the recent victories against the Turks, and to the preparations for a fresh Crusade which was definitively to drive them from Europe and would have changed the course of history. But the efforts of Urban VIII and of other Popes his predecessors, who who had made this project an essential element of pontifical policy throughout the centuries, were rendered useless by the rivalries of Christian Kings.

It remains that, during a persecution, probably that of Septimus Severus (193-211), a group of Martyrs, of whom Martina was one, was put to death upon the Ostian Way.

But even this is not all. The name of a St. Martina is inserted (seventh or eighth century) in the lists of translations of relics made under Honorius (625-638) and under Adrain I (772-795).

—Excerpted from The Year's Liturgy, Volume 2 by Fernand Cabrol, OSBPatronage: Nursing mothers; Rome, ItalySymbols and Representation: Maiden with a lion; being beheaded by a sword; tortured by being hung on a two-pronged hook; receiving a lily and the palm of martyrdom from the Virgin and ChildHighlights and Things to Do: 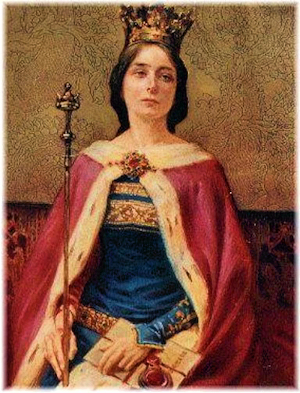 St. Bathildes (also Bathild, Baldechilde, Baldhild, Bauteur) was an Englishwoman, who was carried over whilst yet young into France, and there sold as a slave, at a very low price, to Erkenwald, mayor of the palace under King Clovis II. When she grew up, her master was so much taken with her prudence and virtue that he placed her in charge of his household.

The renown of her virtues spread through all France, and King Clovis II. took her for his royal consort. This unexpected elevation produced no alteration in a heart perfectly grounded in humility and the other virtues; she seemed to become even more humble than before. Her new station furnished her the means of being truly a mother to the poor; the king gave her the sanction of his royal authority for the protection of the Church, the care of the poor, and the furtherance of all religious undertakings.

The death of her husband left her regent of the kingdom. She at once forbade the enslavement of Christians, did all in her power to promote piety and filled France with hospitals and religious houses.

As soon as her son Clotaire was of an age to govern, she withdrew from the world and entered the convent of Chelles. Here she seemed to entirely forget her worldly dignity and was to be distinguished from the rest of the community only by her extreme humility, her obedience to her spiritual superiors, and her devotion to the sick, whom she comforted and served with wonderful charity.

As she neared her end, God visited her with a severe illness, which she bore with Christian patience until, on the 30th of January, 680, she yielded up her soul in devout prayer.

Symbols and Representation: crowned nun often performing menial tasks or giving alms to the poor; ladder extending into heaven; standing before an altar of the Blessed Virgin Mary 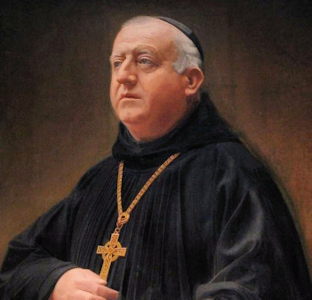 Bl. Columba Marmion was born in Dublin, Ireland, on 1 April 1858 to an Irish father (William Marmion) and a French mother (Herminie Cordier). Given the name Joseph Aloysius at birth, he entered the Dublin diocesan seminary in 1874 and completed his theological studies at the College of the Propagation of the Faith in Rome. He was ordained a priest at St Agatha of the Goths on 16 June 1881.

He dreamed of becoming a missionary monk in Australia, but was won over by the liturgical atmosphere of the newly founded Abbey of Maredsous in Belgium, which he visited on his return to Ireland in 1881. His Bishop asked him to wait and appointed him curate in Dundrum, then professor at the major seminary in Clonliffe (1882-86). As the chaplain at a convent of Redemptorist nuns and at a women's prison, he learned to guide souls, to hear confessions, to counsel and to help the dying.

In 1886 he received his Bishop's permission to become a monk. He voluntarily renounced a promising ecclesiastical career and was welcomed at Maredsous by Abbot Placidus Wolter. His novitiate, under the iron rule of Dom Benoît D'Hondt and among a group of young novices (when he was almost 30), proved all the more difficult because he had to change habits, culture and language. But saying that he had entered the monastery to learn obedience, he let himself be moulded by monastic discipline, community life and choral prayer until his solemn profession on 10 February 1891.

He received his first "obedience" or mission when he was assigned to the small group of monks sent to found the Abbey of Mont César in Louvain. Although it distressed him, he gave his all to it for the sake of obedience. There he was entrusted with the task of Prior beside Abbot de Kerchove, and served as spiritual director and professor to all the young monks studying philosophy or theology in Louvain.

He started to devote more time to preaching retreats in Belgium and in the United Kingdom, and gave spiritual direction to many communities, particularly those of Carmelite nuns. He become the confessor of Mons. Joseph Mercier, the future Cardinal, and the two formed a lasting friendship.

During this period, Maredsous Abbey was governed by Dom Hildebrand de Hemptinne, its second Abbot, who in 1893 would become, at the request of Leo XIII, the first Primate of the Benedictine Confederation. His frequent stays in Rome required that he be replaced as Abbot of Maredsous, and it is Dom Columba Marmion who was elected the third Abbot of Maredsous on 28 September 1909, receiving the abbatial blessing on 3 October. He was placed at the head of a community of more than 100 monks, with a humanities college, a trade school and a farm to run. He also had to maintain a well-established reputation for research on the sources of the faith and to continue editing various publications, including the Revue Bénédictine.

His ongoing care of the community did not stop Dom Marmion from preaching retreats or giving regular spiritual direction. He was asked to help the Anglican monks of Caldey when they wished to convert to Catholicism. His greatest ordeal was the First World War. His decision to send the young monks to Ireland so that they could complete their education in peace led to additional work, dangerous trips and many anxieties. It also caused misunderstandings and conflicts between the two generations within this community shaken by the war. German lay brothers, who had been present since the monastery's foundation by Beuron Abbey, had to be sent home (despite the Benedictine vow of stability) at the outbreak of hostilities. After the war was over, a small group of monks was urgently dispatched to the Monastery of the Dormition in Jerusalem to replace the German monks expelled by the British authorities. Finally, the Belgian monasteries were separated from the Beuron Congregation, and in 1920 the Belgian Congregation of the Annunciation was set up with Maredsous, Mont César and St André of Zevenkerken.

His sole comfort during this period was preaching and giving spiritual direction. His secretary, Dom Raymond Thibaut, prepared his spiritual conferences for publication: Christ the Life of the Soul (1917), Christ in His Mysteries (1919) and Christ the Ideal of the Monk (1922). He was already considered an outstanding Abbot (Queen Elisabeth of Belgium consulted with him at length) and a great spiritual author.

He died during a flu epidemic on January 30, 1923. He was beatified on September 3, 2000 by Pope Saint John Paul II at Saint Peter‘s Basilica, Rome, Italy