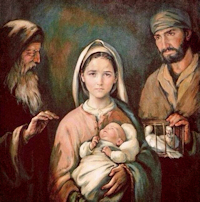 Almighty ever-living God, we humbly implore your majesty that, just as your Only Begotten Son was presented on this day in the Temple in the substance of our flesh, so, by your grace, we may be presented to you with minds made pure. Through our Lord Jesus Christ, your Son, who lives and reigns with you in the unity of the Holy Spirit, one God, for ever and ever. 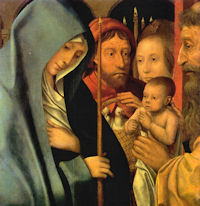 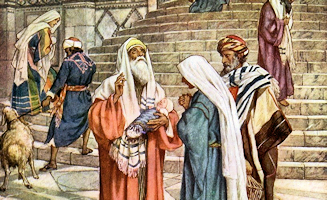 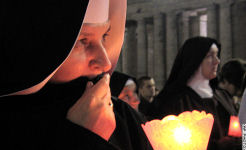 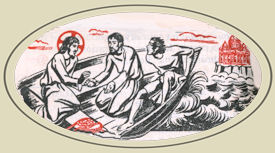 This is a picture of both the human and the Divine in Jesus and in His Church (symbolized by the dome of St. Peter's at the right). Jesus, a tired Man, fell off to sleep during "a great storm." Jesus, the tireless, wide-awake God, "arose," as it were from the tomb of a dead sleep, to restore "a great calm."Enemies of the Church are ever ready to gloat over our human "weakness" (Prayer, Secret), tossed about by the "waves" of human passion, by the "winds" of inhuman evil spirits.The Divine Presence is within our baptized, absolved souls. Let us rise up "from the facination of earthly things" (Postcommunion).— Excerpted from My Sunday Missal, Confraternity of the Precious Blood
Stay in Touch!
Subscribe to Insights...free!
News, analysis & spirituality by email, twice-weekly from CatholicCulture.org.