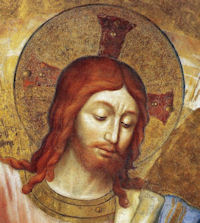 "Let the one among you who is without sin be the first to throw a stone at her." Jesus did not deny the Scribes and Pharisees the right to carry out this prescription of the Law, but he insisted on one condition, namely, that they have no sin on their consciences. When Jesus and the woman were left alone, he looked up and said, "Woman, where are they?" Ironically, the self-righteous observers of the Law, so eager to throw stones, could not measure up to the requirement that Jesus had laid down.