Friday of the Thirty-First Week of Ordinary Time 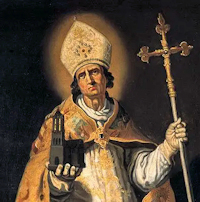 Historically today is the feast of St. Willibrord, apostle of Frisia and Archbishop of Utrecht and St. Engelbert, Archbishop of Cologne, Germany, slain by hired assassins and venerated as a martyr.Don't forget to pray for the Poor Souls in Purgatory from November 1 to the 8th. Meditation: The Church Suffering and the Church Militant
The Church Suffering and the Church Militant constitute in their relations a second circle of most vital activities. Having entered into the night "wherein no man can work," the Suffering Church cannot ripen to its final blessedness by any efforts of its own, but only through the help of others-through the intercessory prayers and sacrifices (suffragia) of those living members of the Body of Christ who being still in this world are able in the grace of Christ to perform expiatory works. The Church has from the earliest times faithfully guarded the words of Scripture that it is a holy and a wholesome thing to pray for the dead that they may be loosed from their sins. [2 Mac. 12, 43] The suppliant cry of her liturgy: "Eternal rest give to them, O Lord, and let perpetual light shine upon them," can be heard already in the Acts of the martyrdom of Sts. Perpetua and Felicitas (A.D. 203) and is represented in numerous sepulchral inscriptions of the most ancient period, while theologians and Fathers of the Church, beginning with Tertullian, have supplied its substantial proof. . . . So fundamental indeed and so natural to man's hope and desire and love is this belief, that historians of religion have discovered it among almost all non-Christian civilized peoples: a striking illustration of Tertullian's saying that the human soul is naturally Christian. The Catholic, therefore, is zealous to expiate and suffer for the "poor souls," especially by offering the Eucharistic Sacrifice, wherein Christ's infinite expiation on the Cross is sacramentally represented, and stimulating and joining itself with the expiatory works of the faithful, passes to the Church Suffering according to the measure determined by God's wisdom and mercy. So the saying of St. Paul that the members of the Body of Christ are mutually careful one for another [1 Cor. 12, 25] is nowhere more comprehensively and luminously fulfilled than in the Church's suffrages for her dead children. When, in the Memento of the Mass, in the presence of the sacred Oblation and under the gaze so to speak of the Church Triumphant, she cries to heaven: "Be mindful also, O Lord, of thy servants and handmaids. . . . who have gone before us with the sign of faith and rest in the sleep of peace," then truly heaven and earth greet each other, the Church Triumphant, Suffering and Militant meet in a "holy kiss," and the "whole" Christ with all His members celebrates a blessed love-feast (agape), a memorial of their communion in love and joy and pain.—Excerpted from The Spirit of Catholicism, Karl Adam 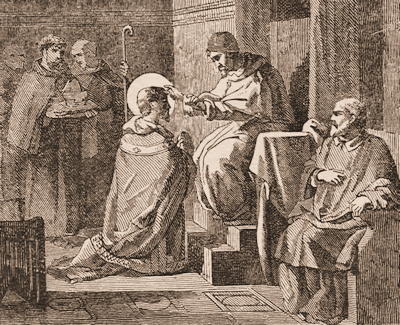 Saint Willibrord was born in Northumberland (northeastern England) in 657. His father left the world to enter a monastery, and is honored as a Saint in the monastery of Echternach in the diocese of Treves, and named in the English calendar. When his son was twenty years old he was already wearing the religious habit. Being accustomed to bearing the yoke of the Lord, and finding it light and sweet, he went to Ireland to seek greater perfection and study under Saint Egbert.

When he was thirty years old he desired, with Saint Swidbert and ten other monks of England, to preach the faith in the land of the Frisons, or Vriesland, a province of the Low Countries surrounding the mouth of the Rhine. The Frisons were warriors and had maintained their liberty against the Romans. The Gospel had been preached among them in 678 by Saint Wilfrid, but those efforts had borne little fruit, and the true God was almost entirely unknown among them when the monks arrived.Willibrord afterwards went on to Rome to ask the papal benediction and authorization to preach the Gospel to the idolatrous nations; he was amply blessed with powers and relics for the churches he would construct. His companion, Saint Swidbert, became the bishop of a group residing near Cologne. The other eleven missionaries preached in the part of Vriesland belonging to the French. Saint Willibrord was recommended for episcopal consecration by Pepin, royal Palace Steward of France; Pope Sergius changed his name to Clement and consecrated him Archbishop of the Frisons in Saint Peter’s Church in Rome.He then returned to Utrecht, where he established his residence and built the Church of the Saviour. He repaired the Church of Saint Martin, which later became the Cathedral of Utrecht. He built and governed until his death the abbey of Echternach in Luxembourg. He baptized the son of Charles Martel, named Pepin, who later became king of France. Charles Martel was a benefactor of the churches founded by Saint Willibrord, and conferred on him sovereignty of the city of Utrecht.Saint Willibrord preached also in Denmark, where a cruel king reigned at that time; the Saint, seeing invincible obstacles to the propagation of the Gospel, merely bought thirty children of the land, whom he baptized and took back with him to Utrecht. He preached on the island of Walcheren, converted many and established several churches. A blow from a saber which an idolatrous priest gave him there made no wound; and the idolatrous priest became possessed by the demon.Saint Boniface joined him in 720 and spent three years with him before going to Germany. Saint Bede, English historian, wrote of Saint Willibrord, saying he was a venerable old man who had for thirty-six years been a bishop and was “awaiting the rewards of life in heaven, after the generous battles he waged in the spiritual combat.” At Utrecht Saint Willibrord founded schools which became famous. He wrought many miracles, and had the gift of prophecy. He labored unceasingly as bishop for more than fifty years, beloved alike of God and of man, and died full of days and good works. This amiable Saint, noted for his gaiety in conversation and his wisdom in counsel, was buried in the monastery of Echternach in Luxembourg.—Excerpted from Les Petits Bollandistes: Vies des Saints, by Msgr. Paul Guérin (Bloud et Barral: Paris, 1882), Vol. 13; Little Pictorial Lives of the Saints, a compilation based on Butler’s Lives of the Saints and other sources by John Gilmary Shea (Benziger Brothers: New York, 1894).Patronage: against convulsions; against epilepsy; the Netherlands, in particular, Waalre, Friesland, and the archdiocese of Utrecht; Belgium, particularly Heusden; LuxembourgUsually Portrayed As: cleric dipping his staff into a caskThings to Do: 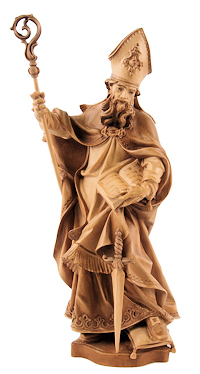 Born at Berg, Germany, c.1187; died near Schwelm, 1225. Engelbert was the son of the count of Berg. While still a boy studying at the Cathedral school at Cologne, he received several ecclesiastic benefices through family influence. The future saint was excommunicated either for threatening Emperor Otto IV with armed violence or for taking unlawful possession of benefices. After he joined the crusade against the Albigensians, the excommunication was lifted. Shortly thereafter he was appointed archbishop of Cologne in 1217 (about age 30).

Engelbert’s life was chiefly taken up with secular affairs of state, and he would hardly have received a saint’s cultus had it not been for the circumstances of his death. He did, however, rule his see well, restored clerical discipline, brought Franciscans and Dominicans into the diocese, held regular synods, encouraged monastic life, and was generous to the poor.As previously stated, he was also deeply involved in politics. He supported Emperor Frederick II (who appointed him regent during the minority of Henry’s son in 1220 when the Emperor went to Sicily), tutored the crown prince, was chief minister of the empire, and crowned Henry King of the Romans in 1222.Engelbert’s crusade against the Albigensians did redeem him in the eyes of the church. Probably only a fighting bishop could have looked after the diocese of Cologne in those turbulent times. Although Engelbert did insist on discipline for the clergy and religious in his diocese, both groups knew they could always rely on his protection.This led to the saint’s murder. His cousin, Count Frederick of Isenberg, was in theory administrator and protector of the nuns of Essen. In practice he stole their lands and goods, and oppressed the vassals of the nuns. The archbishop vigorously protested against the abuse and deprived his cousin of the office. The count and 50 retainers waylaid the archbishop at Gevelsberg, Germany, on November 7, 1225, and left him dead with 47 wounds in his corpse. The young King Henry had the culprits brought to justice (Attwater, Benedictines, Bentley, Delaney, Encyclopedia, White).Although he has never been formally canonized, he is referred to in the R.M. as Saint Engelbert, and is venerated in Cologne (Delaney).In art, Engelbert is depicted in archiepiscopal vestments with a crozier in one hand and an upraised sword, piercing a crescent moon, in the other (White).—Excerpted from Saints of the Day by Katherine Rabenstein Often Portrayed As: archbishop with a crosier in one hand with an upraised sword and piercing a crescent moon with the other hand; archbishop blessing his killersThings To Do:
Plenary Indulgences for All Souls Week
Visiting a Cemetery: An indulgence, applicable only to the Souls in Purgatory, is granted to the faithful, who devoutly visit a cemetery and pray, even if only mentally, for the departed. The indulgence is plenary each day from November 1-8; on other days of the year it is only a partial indulgence.