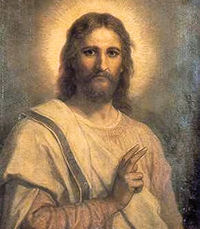 Sunday Readings
The first reading is taken from Isaiah 58:7-10. When lowliness unites all men, then God will fill the need of the world with his glorious presence. The final age will have to come.

The second reading is from St. Paul 1 Corinthians 2:1-5. We continue this week with Paul's 1st letter to the Corinthians as he addresses divisions within the Church. As you will recall, two weeks ago we heard Paul address those who claimed to belong to Apollos, those who claimed Cephas, others who claimed Paul, and even those who followed only Christ. At that time he reminded them all that the Church is the body of Christ and as such cannot be divided. Last week he reminded us that God has chosen what is weak by human reckoning to be His followers. If anyone can boast, they can boast only in that they have been chosen by God. This week he reminds us that we are to pay attention to what is important – we are to hear the clear message of the crucified Christ and pay attention to it and not the messenger.The Gospel is from St. Matthew 5:13-16. No less an authority than Christ himself calls his true followers the "salt of the earth." and the "light of the world." These are titles of honor, surely, and of the greatest distinction. Christ is putting his true follower on almost a level with himself.He was the light of the world; he was the salt of the earth. He it was who gave men the knowledge of the true nature of God, as shown by the Incarnation. He it was who gave this life its flavor, who gave this life its meaning, its preservation. By his death and resurrection he took away the sting of death, and removed its eternal corruption, by the guarantee and promise of a resur rection to an eternal life. This very Christian knows, and this knowledge every Christian helps to bring to those who are ignorant of it, if he lives his life daily and sincerely. The Christian who does this, is really another Christ; he is continuing his work of salvation during his years on earth. He is the salt, of the earth and the light of the world. How many of us, can truly say that these honorable titles, which Christ gives to his followers, are given to us? In true humility, we can all say that we are far from worthy of any such honorable titles. Yet in all sincerity too, many if not the majority among us, are doing their little bit of Christ's work, in cultivating their own small comer of his vineyard. The parents who teach the Christian way of life to their children by word, and especially by example, are spreading the Christian faith. The workmen, whether in office or factory, who show that they are Christians by their honesty, charity for their fellowmen, their respect for God, and the things of God, in their speech, are spreading their Christian faith. All those who show moderation in their personal expenditures, and donate some of their savings to help their brothers, their fellowrnen who are in need, these are true disciples of Christ and are cooperating with him in bringing God's children back to their Father who is in heaven. Unlike the salt that has lost its flavor, and the light that is kept under the bushel, the Christian who has thus behaved can change his attitude, provided he is aided by God's grace which is never refused. He can become once more what he ought to be--a life-preserver for his neighbor. Life on earth is short. The demands of our Christian life may not always be easy, but we know that if we live up to them, we are other Christs. We are continuing his great work by our own good example to our neighbor, and we are giving glory to God, and are earning for ourselves the eternal light of heaven.Excerpted from The Sunday Readings by Fr. Kevin O'Sullivan, O.F.M.

Commentary on the Readings for the Fifth Sunday after Epiphany
"'Sir, didst thou not sow good seed in thy field?' He said to them, 'An enemy has done this'" (Gospel).

The problem of evil is indeed a mystery. But the problem of good would indeed be a greater mystery, did not the good seed of the word of Christ dwell amongst us unto a harvest of mercy, kindness, humility, meekness, patience (Epistle); did not Jesus offer up today's sacrifice of reparation (Secret) and give us a Sacrament of salvation (PostCommunion).During the week, the enemy will try to sow weeds in the field of our daily life; but in our Mass today, the Divine Sower sows His good seed, that it may grow and ripen until gathered by the Divine Reaper into the heavenly barns.Excerpted from My Sunday Missal, Confraternity of the Precious Blood
Stay in Touch!
Subscribe to Insights...free!
News, analysis & spirituality by email, twice-weekly from CatholicCulture.org.